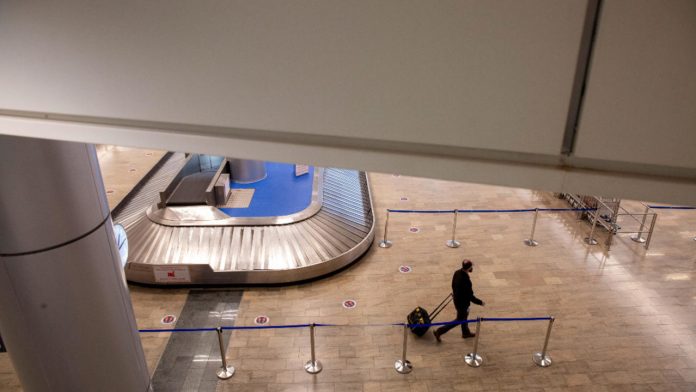 On Sunday, Israel announced a week-long ban on most incoming and outgoing flights in an attempt to slow down the spread of new variants of the new corona virus.

The measure begins at midnight from Monday to Tuesday and remains in force until Sunday, says a statement from the Prime Minister’s Office.

Exceptions will be made for cargo and firefighting flights as well as travel for medical treatment, funerals and legal proceedings.

A panel of officials from the Ministry of Health and Home Affairs will be able to issue exemptions on request “for humanitarian or personal needs”, the statement said.

The decision came with the country in its third national lock-in of coronavirus, which began in late December and was extended on Tuesday to the end of the month due to a sharp increase in deaths in Covid-19.

Earlier Sunday, Prime Minister Benjamin Netanyahu announced his government’s intention to close the airport, as variants of coronavirus have been detected in increasing numbers.

“We are hermetically closing the airspace, in addition to rare exceptions, to prevent the occurrence of virus mutations and to ensure that we make rapid progress with our vaccination campaign,” he said ahead of a government meeting.

Later on Sunday, the Department of Health announced that it had identified cases of a coronavirus variant originating in Los Angeles.

“In the Department of Health’s central virus laboratory, a variant from Los Angeles has been located using a sequencing process,” the ministry said in a statement.

“The person confirmed to have this variant has infected four other people.”

Variants from South Africa and the United Kingdom have also been found in Israel.

Since the rollout of vaccinations last month, more than 2.5 million of Israel’s nine million people have been vaccinated, according to the Ministry of Health.

Adi Cohen, 18, told AFP on Sunday that she had no choice but to get the shot.

“I have my final exams in a few weeks, so I feel I have to take it,” she said from a clinic in Jerusalem.

For 17-year-old Shai Ohaion, he will be able to get close to his parents again by getting a jab.

“I came to be vaccinated to no longer have social distance at home. I can not be close to my parents, because they are vulnerable, which makes the situation difficult,” he said.

“I came to support these efforts to end the coronavirus.”