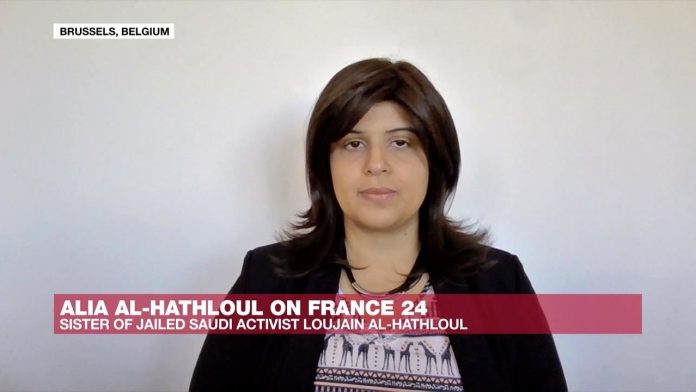 Alia al-Hathloul is the sister of Loujain al-Hathloul, a Saudi women’s rights activist who has been in prison for more than two years without trial. In an interview with FRANCE 24, Alia al-Hathloul said she was “very worried” about the deteriorating health of her sister, who went on a hunger strike on October 26. Saudi Arabia was ready to host a virtual G20 summit from Saturday, Hathloul appealed to the Saudi authorities to release his sister.

In order to Jowharfrom Brussels, the sister called on the imprisoned Saudi activist Loujain al-Hathloul Western leaders to use the upcoming virtual G20 summit to pressure the Saudi regime to free its sister and other female activists. Alia al-Hathloul regretted that Riyadh had refrained from doing so until now, but said she believed the kingdom needed to renew its image and that hosting such a summit could make them make such a gesture.

Hathloul said her sister had started a hunger strike in late October to protest the lack of regular contact with her parents. She said the family was “very concerned” about the deterioration of Loujain’s health and stressed that their repeated requests to the Saudi authorities for an update had gone unanswered.

Hathloul criticized the “absurd” accusations against his sister and other female activists, saying they were punished for just talking. She added that although the Saudi authorities had allowed women to drive and eased certain other rules, they refused to acknowledge that this was partly due to activity-promoting efforts.