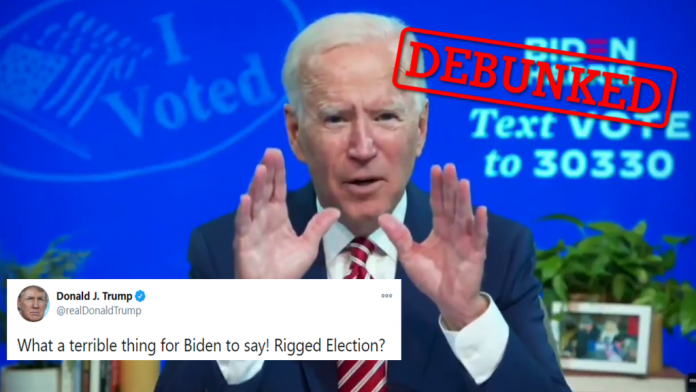 In a video shared widely online, Democratic presidential candidate and former vice president Joe Biden says he and the Obama administration have put together “the most comprehensive and inclusive organization for choosing fraud in the history of American politics.” But was he talking about an organization that commits election fraud or prevents it? While it may seem like Biden has just admitted to a scam scheme, this misleading video was taken out of context.

In the shared clip, Biden says: “Secondly, we are in a situation where we have put together, and you did it for President Obama’s administration before this, we have put together, I think, the most comprehensive and inclusive election fraud organization in the history of American politics. ”

McEnany’s post was retweeted more than 30,000 times, and the interview clip has been viewed more than 7.8 million times on Twitter.

The White House Press Secretary tweeted this misleading video of Joe Biden to over a million followers.

A Twitter account from the Republican National Committee, “RNC Research,” originally posted the clip out of context on October 24th. Meanwhile, President Donald Trump has tweeted about this misleading clip at least five separate times and even added “Rigged election? to the online debate. He was joined by his son Eric Trump, several congressmen as well as other politicians who shared the misleading video.

Countless others shared the clip online, calling it a gaffe, a “moment of clarity” or an admission of guilt.

From time to time, Joe Biden has moments of clarity that allow him to share the absolute truth with the American people. In this clip, he admits to having built up a widespread voter fraud. pic.twitter.com/daxFAbPq6v

Social media users characterized this recording as a slippery slope on the part of the City. A closer look at the source of this interview, however, reveals that instead of admitting to organizing voter fraud, Biden clearly describes the measures taken to combat it.

Taken out of context

This video shows legitimate, undocumented footage of Joe Biden in an interview on a left-wing American podcast called “Pod Save America.” However, the video that went viral online is only 24 seconds of a 25-minute interview with the former vice president.

On October 24, Pod Save America published a 26-minute interview with Joe Biden.

Kl. 17:49 podcast host Dan Pfeiffer Biden asks what his message is to people who have yet to vote, as well as those who have already voted. Biden responds by asking people to make a plan to vote if they have not yet done so due to the occurrence of voter repression.

“Republicans are doing everything they can to make it harder for people to vote – especially people of color – to vote,” Biden said.

Kl. 19:12 we can hear Biden’s now viral statement about “the most comprehensive and inclusive organization with electoral fraud” created during the Obama administration. The statement is followed by an assurance that Democrats will ensure a fair election despite President Trump’s ongoing allegations of electoral fraud.

Read the observers >> ‘Alarm on fraud choice!’ – US voters publish photos of their unsolicited ballots online

When his answer is heard in its entirety, it becomes clear that Biden is referring to an organization that counteracts election fraud when he says “voter fraud”. The organization he refers to is the Civic Engagement and Voter Protection team from the Democratic National Committee.

The program aims to combat electoral fraud and discrimination through a website, IWillVote and a hotline, which Biden describes in more detail in the full interview. These programs were active during the Obama administration and have been strengthened for the 2020 election, which Biden refers to at the beginning of the viral clip, albeit somewhat confusing.

“What the president is trying to do is keep people from voting by implying that their vote does not count,” Biden continues. “We want to challenge it and all that stuff.”

He goes on to tell people who suspect they are victims of voter fraud or repression to call a hotline to get help from a lawyer.

Therefore, once we see this clip in its full context, it is clear that Biden is not admitting a huge scheme of fraud. Instead, he tells Americans how to report voter fraud through a national program set up by the Democratic Party.