Home World Junta has all the cards in Myanmar’s future, but can it end...
Facebook
Twitter
WhatsApp
Linkedin
LINE 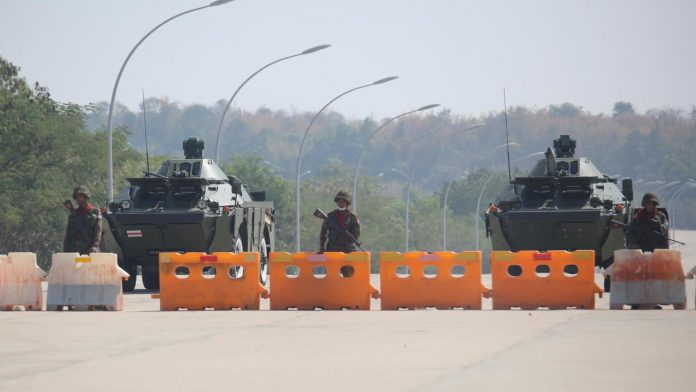 Myanmar’s generals have long set the conditions for the country’s democratic process, and by spreading their economic cards among rivals, the military may just have the upper hand. But can they end the political career of their greatest democratic threat, Aung San Suu Kyi? And is the new US government ready to handle its latest foreign policy test?

Monday, February 2, would be a milestone in Myanmar’s democratic process, with the country’s newly elected parliament holding its first post-election session in November 2020. But it turned out to be a gloomy milestone in the country’s undemocratic history, with the junta capturing election winners and seizing power. in a military coup.

The announcement followed days of speculation that the country’s military chief, General Min Aung Hlaing, had a plan to seize power based on allegations of election fraud that had as much content as Donald Trump’s “Stop Stealing” conspiracy.

But unlike the American political system, Myanmar’s democracy never stood a chance that the people’s government, by the people and for the people, was never anchored in the country’s constitution.

The 2008 Constitution – adopted after a referendum described as an “insult” by international rights groups – was a military company that established a form of guiding democracy with the military playing national caretaker. The 213-page document contains several articles that contain the military’s “right to take over and exercise state sovereign power” in an emergency.

Myanmar’s military, known as Tatmadaw, has long adopted slogans to explain its system of government to the people. During the Cold War, it was “the Burmese path to socialism”. When the generals decided that the old road needed an upgrade to keep pace with the times, a new “disciplined democracy” was introduced in 2008, giving the military 25 percent representation in all legislative bodies and control over three key ministries.

However, the parliamentary elections on 8 November broke the discipline. Aung San Suu Kyi’s National League for Democracy (NLD) party won a landslide 83 percent of the seats in the upper and lower houses. The US-backed Solidarity and Development Party (USDP) suffered a humiliating defeat, which led the military to claim electoral fraud, the country’s electoral commission said.

Suu Kyi and other NLD leaders – including the country’s civilian president, U Win Myint – were arrested early Monday. In his statement on the announcement, Tatmadaw referred to “failures” in the Union’s election commission, appointed by the president, and quoted Article 417 of the constitution, which allows for a military takeover in emergencies.

Inherited sin dates back to 2008, when the new constitution was introduced. For the military, it was everything that would happen in terms of democracy, while for the people of the National League for Democracy, it would be the beginning, eventually the constitution would have to be changed and the role of the military in political life would be reduced, “explained David Camroux, from Paris-based Sciences Po University, in an interview with FRANCE 24.

Constitution is avoided and adopted in a storm

The 2008 Constitution was a military project that took a long time to do and even longer to convince the NLD of its democratic references.

Approved by an unlikely vote of 92 percent “Yes” in a referendum held just two weeks after Cyclone Nargis, the worst natural disaster in Myanmar’s recorded history, the constitution was originally passed by the NLD.

Suu Kyi’s party boycotted the first election under the new constitution in December 2010, enabling the country’s then-military chief, Than Shwe, to go ahead with his legacy project to establish a “disciplined democracy”. The military-backed USDP swept the ballot and realized Tatmadaw’s vision of elected politicians and technocrats opening up the resource-rich country to foreign investment while the junta exercised real power.

In 2011, with the Arab Spring revolts shaking the junta and triggering a rare acknowledgment from a higher general that “we do not want to end up like the Arab dictators”, concessions were made – such as the release of political prisoners -.

When the Obama administration called for reform and international engagement – given China’s growing investment across its southern border – the NLD accepted the constitution. The party has since won every election, increasing its leadership and military concerns.

The NLD’s sweep in the election in November 2020 led to Tatmadaw’s fears standing high. “The military was definitely concerned about the popularity and support of civilian leadership, and they responded with the only way they knew, the use of force,” said Nehginpao Kipgen, executive director of the Center for Southeast Asian Studies at Jindal School of International. Business in India.

In its six-point statement on the latest acquisition, the military declared an indefinite state of emergency, at the end of which “a free and fair general election will be held”.

But there were no details in a framework for the promised “free and fair” election. In the absence of a clear idea, Kipgen speculated that “it is possible that the military may use the emergency period to repeal or amend parts of the constitution.” The provisions that are most likely to attract re-examination include the powers of the Union Electoral Commission and the power of the president to appoint members, according to Kipgen.

‘The beginning of the end’ for Suu Kyi

The morning after the coup, a worried calm sank over Myanmar, according to reports from within the country. But after sunset, car horns and pounding pots were heard over the commercial capital, Yangon.

An arrested lawmaker, who spoke to the Associated Press on condition of anonymity, said he was allowed to speak to other lawmakers under house arrest inside their official residential area in the capital Naypyitaw and make phone calls. But they were not allowed to leave the complex.

Suu Kyi’s whereabouts and whereabouts have not been made public, but an NLD official told Reuters that the country’s elected leaders were “in good health”.

The 75-year-old Nobel laureate is no stranger to military detention. For the past three decades, Suu Kyi has spent about 15 years under house arrest.

Suu Kyi’s last term of house arrest ended in November 2010 to allow her to “organize her party” for the next election. She did. In the 2012 by-election, the NLD won 43 of the 44 seats it contested.

But this time, not everyone is sure that Suu Kyi will make a political comeback. “As far as I can see, the military will never allow Aung San Suu Kyi to hold any office again,” Maung Zarni, a Burmese human rights activist in London, told the Jowhardebate.

Referring to her official title as “State Adviser” – a role invented by the NLD when Suu Kyi was expelled from the presidency – Zarni noted that “her position was never part of Myanmar’s constitution. The generals believed that they had been outlawed legally by Aung San Suu Kyi and her lawyers. I think this is the beginning of the end of Aung San Suu Kyi’s political career. No matter what happens to the NLD, the generals have decided that every time they try to play this so-called democracy game with Aung San Suu Kyi, she always beats them. “

While Mynmar’s “Ignoble Laureate” has fallen out of international favor over her defense of the military against genocide allegations against the Rohingya minority, the November 2020 survey results show that the daughter of the country’s founding father remains popular in his home country.

In a return to the bad old days, the United States and its allies are back to demand the release of Suu Kyi while threatening sanctions against Myanmar’s military rulers.

US President Joe Biden has called the coup “a direct attack” on Myanmar’s transition to democracy and in a statement warned that “the US has lifted sanctions on Burma over the past decade based on progress towards democracy. The reversal of this progress will require a immediate review of our sanctions laws and authorities, followed by appropriate action. “

On Tuesday, the United States officially declared what happened in Myanmar a “coup”, which set the stage for sanctions. Humanitarian aid to the people of Myanmar would not be affected by the sanctions imposed by the United States, a State Department official said.

During the 1990s, Western sanctions against Myanmar severely limited investment, job creation, and borrowing opportunities in the poor Southeast Asian nation. But while harming the country’s poorest, the junatas’ kleptocracy enriched their network of monopolies and opaque business in what Thant Myint-U, author of several books on Myanmar, calls “Burmese capitalism.”

“New Burmese capitalism has mutated over the years as Western sanctions have become tougher. Heroin production and felling of new forests became a path to wealth. Millions of acres were confiscated from the locals and rented out or sold to former black marketers, warlords or comrades from the generals, all of whom were now hailed as “national entrepreneurs.” In the 2000s, jade mining for sale to China produced billions of dollars in profit, Myint-U stated in an essay in the London Review of Books.

Following the lifting of sanctions in 2011, the country opened up for trade in bilateral trade, which increased between Myanmar and Singapore, Japan, Australia, India and Thailand. In an attempt to balance its dependence on China, Myanmar’s authorities reached out to a number of countries, including Russia. But Beijing, with its huge China-Myanmar economic corridor, is still a leading investor seeing geostrategic gains in its regional backyard.

The UN Security Council is holding a special meeting on Tuesday on the situation in Myanmar. But Zarni is not optimistic about much progress within the UN’s highest body. Burma enjoys double veto from China and Russia. “China is not the only protector of the Burmese military,” he said. “The Burmese military has never put all its eggs in one basket – Russia or China or the West – and the Security Council will never be able to take any action,” he predicted.

Barely two weeks after Biden took office and promised democracy and human rights as a “north star” for his foreign policy, Myanmar’s recent crisis gives the new US president an opportunity to flex his international moral muscle.

But it also reveals the limits of US power in the face of a rising, pragmatic China in a region where a number of countries such as Thailand and India are lagging behind liberal democratic principles.

“Much as I respect the Biden administration towards the former white supremacist, right-wing Trump regime, I think American words will sound hollow. We are looking at a region where democracy is not a special feature. Look at ASEAN [Association of Southeast Asian Nations] countries – only two can be called nominally democratic: Indonesia and Malaysia. The rest of the bloc, including Singapore, has different types of authoritarian regimes, Zarni said. “Democracies cannot count on the United States, while dictatorships, authoritarian or autocratic regimes can count on the support of Beijing or Moscow.”