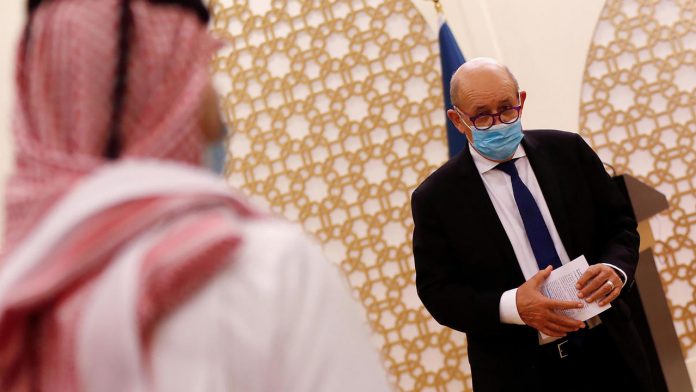 During a visit to Doha on Thursday, the French Foreign Minister said that his country’s policy against extremism had been misrepresented and was not Islamophobic.

Paris has been criticized for bills aimed at fighting Islamist radicalism that tightens the rules for religion-based education and polygamy after a series of attacks accused of extremists.

Jean-Yves Le Drian said that after the attacks, “our positions and statements (about fighting extremism) were largely distorted and distorted as part of a campaign against our country”.

“[Our position] may have been misunderstood by believers who may have felt that their faith was not respected, says Le Drian in Doha for a day of official visit, in a press release.

“We have the greatest respect for Islam,” added the French foreign minister, who has cultivated close ties with Middle Eastern leaders during the presidencies of Emmanuel Macron and François Hollande.

Tensions flared between France and some Muslim countries over statements by President Macron in October to defend the right to publish caricatures, including those of the Prophet Muhammad, and suggested that Islam was “in crisis”.

While Qatar did not directly criticize France, some prominent Qatari retailers have boycotted French products in response to the comments.

Qatar’s foreign minister, who spoke with Le Drian, said that “violent extremism is not linked to or linked to any religion”.

“We must stand up to Islamophobic speech just as the world opposes all forms of racist rhetoric,” said Sheikh Mohammed bin Abdulrahman Al-Thani.

Muslims around the world have protested Macron’s fierce defense of freedom of speech and the right to mock religion after a French schoolteacher who showed his class the caricatures was murdered in October.

On Wednesday, the French government defended draft legislation that stuck to Islamist radicalism as a “law of freedom” after a stream of criticism from Muslim countries and expressions of concern from the United States.

“This bill is not a text aimed at religions or the Muslim religion in particular,” Prime Minister Jean Castex told reporters on Wednesday after the cabinet approved a text to present to parliament.

Analysts have said that the long-term effects of the controversy would depend on France’s next step.

Dozens of prominent French brands are active in Qatar, including construction companies, retailers and luxury brands such as Louis Vuitton, beloved in the rich gas-rich nation.

French exhibitions in Qatar include the Jean Nouvel-designed National Museum in Doha, the signal system on the new metro and an outpost to the Galeries Lafayette department store.

Qatar is also a major buyer of French military hardware with its order for 36 Rafale warplanes worth 8.7 billion euros, according to the International Institute for Strategic Studies’ military balance sheet.