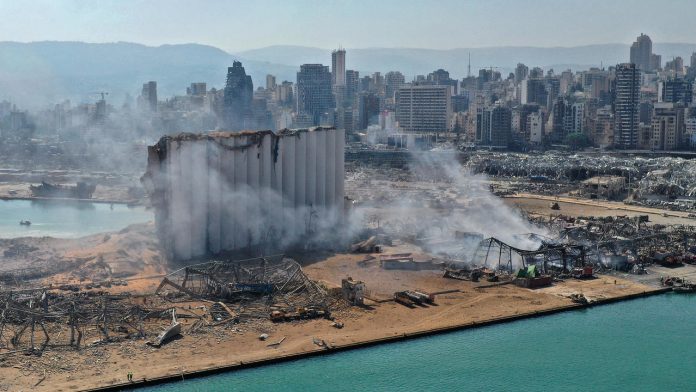 A Lebanese court on Thursday dismissed a judge who had accused top politicians of negligence over last year’s port explosion in Beirut, outraging families of victims who said it showed the state would never hold powerful men accountable.

Judge Fadi Sawan had led the investigation into history’s largest non-nuclear blast. In December, he accused three former ministers and the outgoing prime minister of negligence.

Two hundred people died in the explosion on August 4, 2020 when a huge stockpile of ammonium nitrate, which had been stored unsafe for several years, exploded in the capital’s port. Thousands were injured and entire neighborhoods were destroyed.

On Thursday, the Lebanese Court of Cassation demanded that a new investigating judge be appointed to lead the probe, almost six months after it began.

The court decided to remove Sawan from the case following a request from two of the former ministers he accused.

A copy of the decision that Reuters saw cited “legitimate suspicions” about Sawan’s neutrality, in part because his house was damaged in the explosion that destroyed much of the Lebanese capital.

The move will probably delay an investigation that has met with political regression and has not yet yielded results.

“A mockery of justice”

Rights activists immediately condemned Thursday’s decision as the latest example of an entrenched political class that places itself above the law.

Sawan’s removal “mocks justice and is an insult to the victims of the explosion,” said Human Rights Watch researcher Aya Majzoub.

The verdict showed that “politicians are not subject to the rule of law”, she added.

Following the announcement, dozens of family members gathered for people killed in the harbor blast outside the main court.

“Today you have killed us again! The investigation is over. We are back in the first place”, shouted one of the protesters while others carried pictures of the victims.

On December 10, Sawan had issued indictments against Prime Minister Hassan Diab and three former ministers for “negligence and causing hundreds of deaths,” which sparked outrage from politicians.

Premier-appointed Saad Hariri and the powerful Shiite movement Hezbollah were among those opposed to the indictment.

Among the accused were former Finance Minister Ali Hassan Khalil and Public Works Minister Ghazi Zaiter, who accused Sawan of violating the constitution due to immunity and proposed having him removed from the case.

Lawyer and activist Nizar Saghieh said he needed to see the entire court’s decision, but feared the worst.

“By refusing to be held accountable, the ministers and the political class draw a red line in the investigation,” he told AFP.

He said it was a typical pattern in Lebanon that “prevents justice from being achieved”.

Majzoub said: “More than six months later, we are back in first place.”

“This charade must end … We need an international, independent inquiry as soon as possible.”

Not a single politician imprisoned

The investigation into Lebanon’s worst peacetime disaster has led to the imprisonment of 25 people, from maintenance workers to the port’s customs chief, but not a single politician.

It has mainly focused on who was to blame for leaving the fertilizer unsafe in the port for more than six years, not how ammonium nitrate ended up in Beirut.

On Monday, however, Sawan requested information from Lebanese security forces about three Syrian businessmen who were believed to be behind the procurement of the fertilizer shipment that arrived at a dilapidated ship from Georgia in 2013.

Diab resigned after the port explosion, but the deeply divided political class has not been able to agree on a new cabinet line-up.

The pressure from the former colonial power France, whose president Emmanuel Macron has visited twice since the explosion, has not succeeded in ending the stalemate.

Lebanon desperately needs the government to launch reforms and unlock international aid to lift the country out of its worst financial crisis since the 1975-1990 civil war.

The value of the local currency has fallen by more than 80 percent and about half of the population lives in poverty.