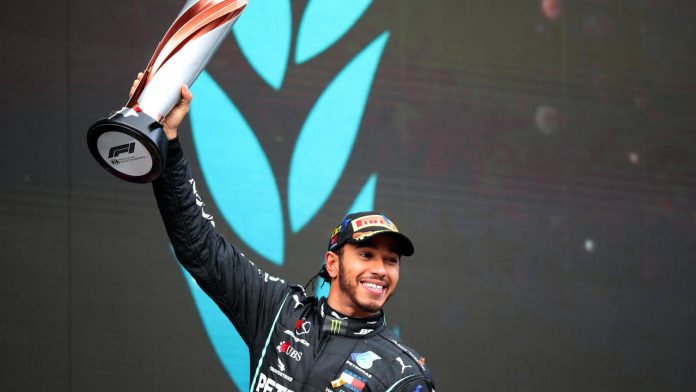 Lewis Hamilton cemented his position as one of Formula One’s true greats when he equaled Michael Schumacher’s record of seven world titles on Sunday, another astonishing achievement for a boy who grew up in modest circumstances.

Son of a black father and a white mother, whose parents separated in their youth, Hamilton, 35, grew up in a municipal residential area. His father Anthony held down for a time three jobs to finance his son’s embryonic racing career in karting.

Hamilton’s journey was privileged and without luxury, but it was clear from an early age that he had an outstanding gift for speed and all the brave natural instincts of a born racer.

In 1995, 10 years old, with a jacket and shoes borrowed from his predecessor as British champion in formula karting, he went to a glittering award ceremony in London where he met McLaren’s then boss Ron Dennis.

He asked for an autograph and told him “one day I want to compete for you”. Dennis replied, “Call me in nine years and I’ll arrange a deal.”

Bold, determined and individual, he almost won the title in his first record season as he rolled off nine consecutive podium places from his debut in Melbourne and rocked the facility along the way with his speed and style.

On and off the track he was fast, a bit mercury and sometimes stormy and the combination led to a fierce rivalry with teammate and two-time champion Fernando Alonso at McLaren.

It was a signal of how tough it was to be for all his future teammates, as Hamilton, who barely missed the 2007 title, returned to triumph in 2008 with a dramatic fifth place in Brazil.

He also showed frustration when McLaren failed to deliver the speed to beat Sebastian Vettel and Red Bull, who struck out four straight title triumphs from 2010 to 2013, when Hamilton had left for Mercedes.

Hamilton escaped from the management regime of Dennis and his father and found freedom at Mercedes together with teammate Nico Rosberg, his teenage map friend and rival.

This enabled Hamilton to express himself with a headline-grabbing transatlantic lifestyle, mixed with musicians and “fashionistas”.

He showed little love for any obligation to obey conventions and for many observers he gave his sport a welcome injection of freshness and diversity as champion again in 2014 and 2015.

Rosberg broke Hamilton’s superiority in 2016 and then retired, leaving the Englishman to dominate.

That speed, which has always been a natural talent, has in recent seasons been allied with a more mature attitude to his job as a team leader.

Having achieved so much as the sport’s most famous ambassador, Hamilton’s interest in social issues has emerged more frequently.

Last season, he began expressing his concern for the environment and revealed a fleeting despair over the state of the world when he used Instagram to explain that the planet was “a tangled place” and he felt he wanted to “give up”.

That comment, including revelations about his vegan lifestyle, led to the man who often used private jets and engages in a sport barely knowing for his green credentials being accused of hypocrisy.

“I’m just human,” he replied. “Like everyone, we have upside-down days. That’s what I’ve really tried to convey.”

This year, he has seen him press for greater diversity in the paddock, a pressure that is triggered by his voice support for the Black Lives Matter movement.

His own career and his pursuit of self-expression and freedom have shaped his advice to young drivers.

“What I can definitely recommend to any child who is out trying to compete is not to listen to people who say you need a mental trainer or that you need someone to help you control your mind,” he said.

“You have to let it run free and discover yourself. It’s about discovery. And only you can do it.”

When Hamilton won his sixth world title in Texas last year, his father summed up his son’s performance: “It’s absolutely amazing and not bad for a boy from a Stevenage town hall.”