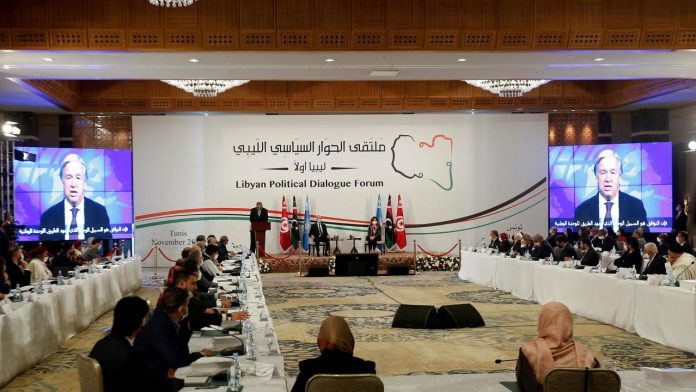 Political talks on Libya’s future have reached an agreement to hold elections within 18 months, the UN’s functioning Libyan envoy said on Wednesday, praising a “breakthrough” in a peace-building process that still faces major obstacles.

“There is real momentum and that is what we need to focus on and encourage,” said Ambassador Stephanie Williams at a press conference in Tunis, where 75 Libyan participants selected by the UN have met since Monday.

The meeting has reached a preliminary agreement on a roadmap for “free, fair, inclusive and credible parliamentary and presidential elections” which also includes steps to unite institutions, she said.

Libya has been in chaos since 2011 and divided since 2014 between rival factions in the East and the West, with larger institutions also being divided or controlled by armed groups.

With both sides torn by political, regional and ideological divisions between the armed factions that support them, and with foreign powers pouring into arms and mercenaries, many Libyans remain skeptical of peace-building efforts.

However, the Tunis talks follow a ceasefire agreed between GNA and LNA last month in Geneva.

On Thursday, a joint military commission set up in the flashpoint city of Sirte to hammer out the details of the ceasefire will consider adopting proposals for both sides to withdraw from the front lines.

Thursday’s talks in Tunis will focus on a new unified transitional government to monitor ahead of the election, where participants will discuss its “powers and competencies”, Williams said.

The new government must quickly address deteriorating public services and corruption, two issues that led to protests on both sides of the front line this summer, she added.

The roadmap also outlines steps to begin a process of national reconciliation, transitional justice and addressing the situation of displaced people, Williams said.

She said Tuesday’s assassination of dissident lawyer Hanan al-Barassi in Benghazi “reminds us of the need for Libyans to really end this long period of crisis and division and fragmentation and impunity”.