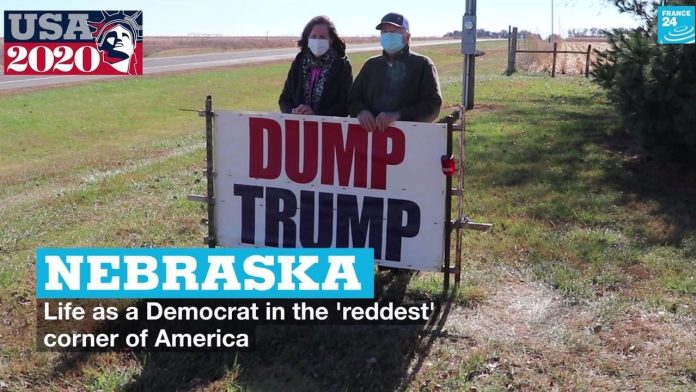 In the third in our series of reports on America’s forgotten voters, we are in Nebraska’s third congressional district, where Donald Trump won 74 percent of the vote in 2016, making it one of the “reddest” parts of the country. For the region’s few Democrats, it may just be bold to express their political views.

Unlike most other states, Nebraska divides its electoral votes between congressional districts, and the third district is possibly the most pro-Republican part of America. It has not supported a Democrat in the referendums since 1936 and ranks low on the list of priorities for both presidential candidates.

For Jessica Manley, president of the Democratic Party of Seward County, within the third, that means her job can be a challenge.

“You just kind of know who you can talk to and who you can’t talk to about certain issues, especially political issues.”

Nevertheless, some are not afraid to publicly show their fidelity to the party. But doing so can be risky, as Bill and Delores Schatz found out after they signposted “Dump Trump” outside their homes.

“We were in the house, it was 10.45 at night, and we heard two powerful bangs, and I came out with a flashlight, and someone had shot at the sign with a shotgun,” Bill said.

“Kaboom! Very loud, very loud. It scared me,” Delores added. “They make me a little nervous because they are armed people.”