Home World Lille goes to the top of the French league after routing the...
Facebook
Twitter
WhatsApp
Linkedin
LINE 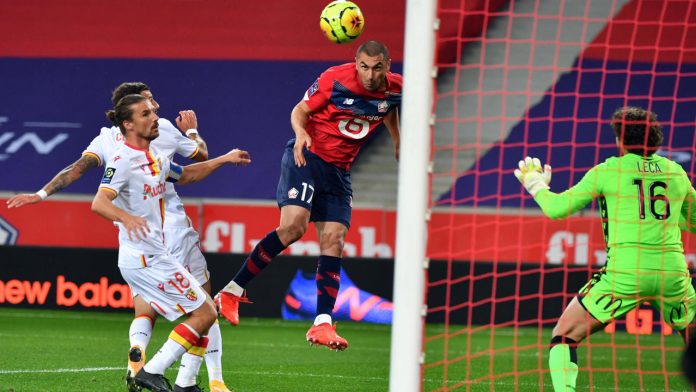 Lille grabbed the top spot in Ligue 1 on Sunday by smashing the newly promoted lens 4-0 in France’s northern derby when the poorly disciplined visitors got two players sent off.

Lens had a chance to get to the top in France for the first time in 16 years, but their defensive weaknesses were relentlessly revealed by Lille, moving two points ahead of defending champion Paris Saint-Germain.

Burak Yilmaz’s low shot put the home team ahead in the echo-blank Stade Metropole after 11 minutes.

Objective hung until the second half when Jonathan Bamba scored Little Second before first Jonathan Gradit and then substitute Clement Michelin were shown red cards as lens fell apart.

Jonathan Ikone and Yusuf Yazici finished the job for Lille.

LOSC with a thumping victory against 9 men to go to the top of Ligue 1.

ElikCelik fantastic in right back, Burak got the opener and Yazici on goal from the bench. Brilliant Jonathan Bamba scores in 48 ‘to give Lille a 2-0 lead over lens in Derby Du Nord pic.twitter.com/O4tW44QQcG

Lyon coach Rudi Garcia said his team had “turned the page” after captain Memphis Depay set up three goals in Sunday’s 3-2 win in Strasbourg to claim their first win since August.

The Dutch striker, who was linked with a move to Barcelona during the transfer window, was the provider of Zimbabwe’s international striker Tino Kadewere and repeated the task twice for Karl Toko Ekambi in the first half.

Habib Diallo and Jean-Eudes Aholou scored for the hosts, but Lyon hung on and came up to ninth with their first three points since August.

“The victory was more than deserved. This team had the capacity to admit they had to turn the page,” Garcia said.

“The answer was on the field, three Depay assists and three goals in open play.”

Kadewere opened the scoring after 15 minutes and fired home for the first time from Depay’s long ball.

Depay is then combined twice with Toko Ekambi within the 42-minute mark to make it 3-0.

The hosts fought back when Senegal’s Diallo cut the deficit just over a minute later.

Ivory Coast midfielder Aholou, on loan from Monaco, scored with a left-footed volley 10 minutes into the second half.

Patrick Vieira’s Nice side eased to a 3-1 win at Saint-Etienne to go up to fourth and joined Lens on 13 points.

Pierre Lees-Malou opened the scoring for Nice before 20-year-old Amine Gouiri added a second before the break.

Adil Aouchiche pulled a goal back to Saint-Etienne in the 57th minute, but Myziane Maolida sealed the points for the Southerners.

On Saturday, Marseille warmed up for their return to the Champions League next week with a 3-1 win over Bordeaux.

Senegal: At least 140 people were killed in this year’s deadly shipwreck