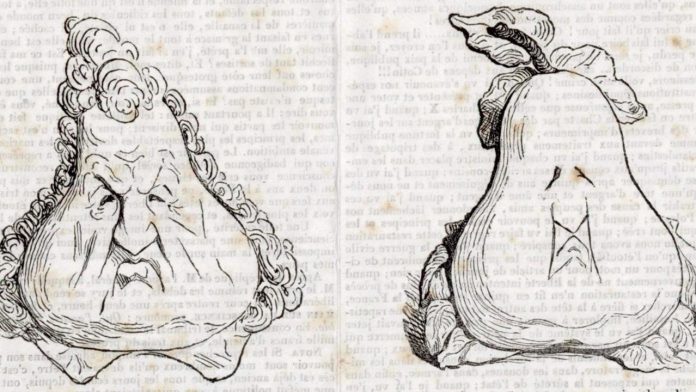 French history teacher Samuel Paty was assassinated on October 16 after showing two caricatures of the Prophet Muhammad in a class on freedom of speech. In recent years, caricature in France has hit the headlines due to Charlie Hebdo’s reverent comics and the terrorist attacks of 2015. But caricature has a long and colorful tradition in the country.

The Danish newspaper Jyllands-Posten published a series of Prophet Mohammed cartoons in September 2005, which caused a global uprising. The French satirical newspaper Charlie Hebdo republished the comics in February the following year and has not held back from publishing insulting images of the Prophet in recent years. The newspaper’s office building was targeted by a firebomb in 2011, and four years later, 12 people were killed in a terrorist attack on the same site. But caricature is nothing new in France: the country has a long history of deliberately burning comics and sketches. Let’s look back in the archives.

In the Middle Ages, caricature became more and more common. “The first illustrations displayed in the late 14th century are engraved on wood,” describes the Bibliothèque nationale de France (BNF), the national library of France. Sculptures inside or outside churches would show “grotesque characters, amazing and symbolic animals”. But it is the birth of the printing press in the 15th century that helps popularize the style. Protestant reformers use caricature to mock the pope. In France, King Henri III is ridiculed by a caricature campaign before the assassination.

“The explosion of political caricature always occurs in a time of crisis; in addition, caricature is closely linked to the material of the document itself and how it is circulated (an image inserted in a booklet, sold as a loose sheet or as part of a series, a poster, illustration in a local newspaper, a sketch in a reputable newspaper) ”, Explains BNF.

According to historian Annie Duprat, it is during the French Revolution that caricature really comes into its own. “When Pope Pius VI condemned the civil constitution of the clergy, voted by the National Assembly in the spring of 1791, Jacques Bonhomme – a character representing the daily Frenchman – wasted no time in his reaction: he wiped himself back with the pope’s briefing,” he writes. she. in an article for the conversation. The reverent image, which combines scatological humor and a shocking inversion of typical values, is an example of how caricature became its own kind of “political language,” she says. According to the BNF, 1,500 satirical illustrations were made between 1789 and 1792.

Not surprisingly, the king was a major target for cartoonists. In the 19th century, the number of illustrated magazines grew with the rise of the press. In the time of the July monarchy from 1830 to 1848, it was then King Louis-Philippe in the firing range. He struck back. Cartoonist Daumier spent six months in prison after portraying Louis-Philippe as the giant Gargantua, a character taken from a series of novels by Rabelais. Later, Daumier drew the king’s face on a light bulb and copied a motif created by the artist Charles Philipon. Philipon himself was sentenced to six months in prison for ‘insulting the king’. In 1835, a law reintroduced censorship (which had been abolished in 1824 by Charles X) for comics, engravings and lithographs.

Only when a new law on press freedom was created in 1881 did caricatures begin to spread again. In the late 19th century, Dreyfus Affair provided the cartoons with the perfect story to let their performances run rampant. The Dreyfus affair was a political scandal that ran from 1894 to 1906 – and has become a shorthand for abortion on justice and anti-Semitism. The famous drawing by Caran d’Ache, ‘Ils en ont parlé’ (‘They talked about it’), shows an elegant family dinner that falls into chaos after the controversial news story is brought up at the dinner table. The drawing was published in the newspaper Le Figaro and has since become an iconic illustration from that era.

The famous drawing by Caran d’Ache about the Dreyfus affair. © Wikimedia © Wikimedia

On the website of the First World War Centenary Program, historian Laurent Bihl notes that “a large part of the French satirical press did not survive the beginning of the Great War”. This was because printing was interrupted due to “the state of the siege, the fact that many illustrators went out to fight and the lack of resources”. But the surviving publications used their solitary positions in the market to publish propaganda against the enemy. During this period, new publications were also created, such as the satirical newspaper Le Canard Enchaîné, which still exists today.

May 68 and Charlie Hebdo

During World War II, censorship mostly wiped out caricatures except in pro-Vichy newspapers that sided with the Nazis, where they were used to spread anti-Semitic propaganda. Comics first became political again in the 1950s, and caricatures about Charles de Gaulle became particularly popular. The cartoonists used them to condemn the authoritarian aspects of the incumbent government and compare it to other eras under different authoritarian leaders: for example, Louis XIV or Napoleon. The cartoonists often portrayed de Gaulle as a kind of almighty sovereign – at his expense.

A photo of a poster on a wall in Paris, taken in September 1958. The poster is from the PCF and requires a no to a referendum on the Constitution of the Fifth Republic proposed by Charles de Gaulle. AFP AFP

It is during this period, in 1960, that Hara-Kiri, the forerunner of Charlie Hebdo, was launched, first as a monthly newspaper, then as a weekly newspaper in 1969. Hara-Kiri has subtitled itself “the stupid and unpleasant newspaper”, and tried to live up to that description as much as possible in his provocative and scornful treatment of French social notes and values. It was temporarily banned twice by the French government in 1961 and 1966 and then published a scornful cover in response to de Gaulle’s death in November 1970, which was the last straw for the authorities to ban it permanently.

It was erected two years later under the name Charlie Hebdo, but as BNF notes on its website, it evolved into another animal: “Press illustrations slowly replaced the caricature, and the cartoonists’ training, status and practice changed. They now called themselves artist-journalists. ”

Charlie Hebdo has endured the storms over the years, despite briefly disappearing from circulation in the 1980s as its readership declined. It has been the target of numerous complaints, predominantly from political right-wing extremist and Catholic organizations. But it is its treatment of Islam that has provided it with death threats – threats that were eventually carried out in the terrorist attack on its offices on January 7, 2015, that killed 12 people and were claimed by al-Qaeda.

This article was translated from original in French by Catherine Bennett.