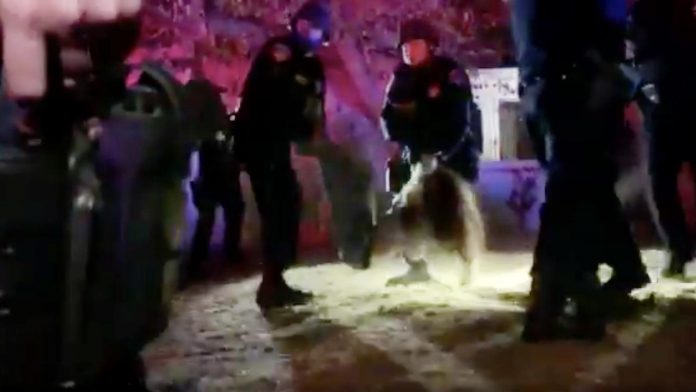 Residents and protesters in Los Angeles, California, confronted law enforcement agencies that forcibly evicted homeless and homeless families from state-owned homes on the night of November 25 and 26. The families, members of a local housing activist group, claimed they were using homes to “be protected on the spot” when Covid-19 cases increased in California.

The night before Thanksgiving, officers from the California Highway Patrol (a state law enforcement agency) were filmed slamming the door of a house with a bang in the El Sereno neighborhood.

The California Highway Patrol uses a ramp to slam the door so they can drive out a family.

Police officers aiming rifles at small children through the windows.

Just in time for Thanksgiving. This is what @GavinNewsom stands for. pic.twitter.com/rREOJGIyyJ

A video in a November 26 Twitter thread published by security chief Chad Loder shows officers bumping into the door of the house while indignant spectators shout at them to stop and say “there is a family in there”.

The vacant house, purchased by the California Department of Transportation for demolition for the disused 710 freeway extension project, was occupied for many Wednesdays by 20 families in the “Reclaim and Rebuild Our Community” activist group. A YouTube video from November 25 from the group stated that the families included “children as young as 3 months and older over 70 years […] who have lived in cars and in camps. ”

As the situation escalated, officers performing fighting members were filmed amid screams from spectators.

Officers also entered other houses in the neighborhood occupied by “Remain” members, as this video shows. But they were met by resistance from the locals, who tried to prevent the officers from circulating in the neighborhood and telling them their actions.

This Twitter video on November 26 shows rattling officers shouting at locals to “come back” when they peacefully stand in the servant’s way.

This Twitter video on November 26 shows a man telling a series of silent officers. Are you proud of yourself? Happy Thanksgiving, he says. “Your children will be embarrassed to tell their friends what their parents are doing to support themselves.”

The local news channel ABC7 reported that about 100 officers were present in the neighborhood that evening. It was not clear how many people were thrown out.

On the night of November 26, Thanksgiving, officers returned to the same neighborhood amid protests from a large crowd of locals and protesters, who gathered after the spread of the previous night’s videos on social media.

Eviction defenders stand with about 75 CHP officers at 2970 Lowell Ave.

This November 27 Twitter video shows protesters facing a couple of dozen officers in front of another home in the El Sereno neighborhood and shouting “Pigs go home!”.

As the scene became more chaotic, officers bandaged and abducted people who appeared to be demonstrating in front of the home, while the crowd shouted insults at them.

Deportation defenders refuse to leave this family. CHP officers in riot gear beat the defenders one by one and lead them to waiting vans.

Neighbors are terrified. Cops rifle through people’s tents and shoot witnesses, all in the light of Christmas decorations. pic.twitter.com/XKzfiIB3I9

On November 27 at 07:30 PST it is not known how many people were deported. France 24 Observators have reached out to the California Highway Patrol, which has not responded to requests.

A movement to take back community homes for months

Members of the “Reclaim” activist group first occupied vacant state-owned homes in El Sereno in March, when California ordered residents to protect on the spot due to the coronavirus pandemic.

This eventually led to the state creating a transition program at the end of October, turning 23 of the vacant properties into temporary housing for people in need, including 13 families from the activist group. Members of the program can stay at home for up to two years.

Activists, however, want to see housing become permanent housing by transferring it to society’s land trust so that they are jointly owned.

“It is impeccable that someone should be forced to spend Thanksgiving, or any other day of the year, on the street.”

Los Angeles City Councilman Kevin de León quoted the deportations in a Twitter post on Nov. 26, saying his office “worked to secure hotel vouchers and other rapid rebuilding solutions for those in immediate need” and worked with government officials to expand permanent housing solutions. for more families. He also criticized the “physical methods of application” used by officials and said the images of the deportations were “heartbreaking” and “unacceptable”.

Although he mentioned that the city had started housing people in some of the vacant homes, he did not specify whether the homes from which the families were evicted were part of the transitional housing program.

In an email to the local CBSLA news channel, a representative of the California Department of Transportation said the homes in question were unsafe and uninhabitable for residents, and that officers were ordered to remove offenders so the properties could be secured again.