Home World Macron launches talks between police and the public, but some are already...
Facebook
Twitter
WhatsApp
Linkedin
LINE 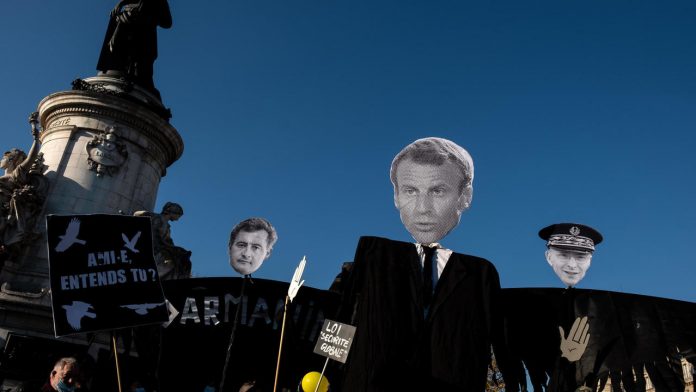 In order to improve the operational conditions of the French police and improve their ties with the public, President Emmanuel Macron has announced a series of consultations, known as the “Beauvau of Security”, for January. But the idea is already met with a lot of skepticism.

Trapped in the crossfire between security forces and the public following allegations of police crimes, Macron uses what has become accustomed during his presidency: arranging major stakeholder consultations. Having already held such discussions on food, domestic violence, climate and health, he has now reported one to the French police.

Accused by many organizations and civic groups of turning a blind eye to police violence, criticized in recent days by law enforcement unions for talking about violence and facial recognition checks during an interview with the online publication Brut, the French president chose a solution that, according to him, will remove an explosive situation and help bring about reconciliation between the French public and the police.

This consultation, known as the “Beauvau of security” (after Place Beauvau, the Parisian square where the French Ministry of the Interior is located) will bring together representatives of law enforcement agencies, elected officials and citizens.

“I will participate in person,” Macron promised in a letter to Unite-SGP-FO police union official Yves Lefebvre, which was seen by AFP. Lefebvre had written to Macron to express “anger” among police over his comments during his interview with Brut.

“There is an urgent need to act,” Macron continued in the letter. “On the one hand, to strengthen the trust between the French and the forces of law and order. But also to give the police and the gendarmes the means to fulfill their commitments and the expectations of our citizens.”

Macron said the meeting would focus on seven key areas for reform: police training, their oversight, resources, filming of service police, inspections, staff levels and relations between the police and the public.

But who will sit at the table?

The announcement was surprising given what had come earlier. On 16 November, the Ministry of the Interior published its “White Paper on Internal Security”, the result of several months of work bringing together security experts, elected officials, prefects, field agents, researchers and academics, private security stakeholders and citizens. The 332-page document contains 200 measures specifically aimed at “guaranteeing the effectiveness of internal security forces” and “rebuilding the conditions of trust between the population and the security forces”.

“There is a clear overlap with the White Paper,” Mathieu Zagrodzki, a Cesdip researcher at the University of Versailles Saint-Quentin and a police specialist, told FRANCE 24.

Given that Macron has promised to attend the meetings, they will certainly be in the media. But will it enable a constructive dialogue? It is far from a given, judging by the reactions of the most important law enforcement unions.

While the Unite-SGP-FO praised the “president’s quick response”, both the unions and Synergy Officers’ unions were “cautious” and added that this type of meeting would not “solve the problems”. The alliance warned that it would not “respond to the presidential invitation” and, in addition, all unions said that their calls on their members to stop conducting identity checks would be maintained.

“The success of this event depends in particular on the participants,” Zagrodzki continued. “We will need diversity and representation to find a meeting place between law enforcement agencies and the public, relying on the participants who are most open to dialogue.”

Another question concerns the themes that will be put on the table. The Interior Ministry’s White Paper had carefully omitted sensitive topics such as police violence, the French’s growing distrust of the police, allegations of systemic racism and the IGPN, the French Department of the Interior, independent. So will these topics be addressed directly this time?

“I hope for good news, but Emmanuel Macron is used to making promises and announcements that lead to nothing,” Alexandre Langlois, general secretary of the Vigi police union, told FRANCE 24. Langlois recently announced his resignation from the police following the Michel Zecler affair. an incident where security cameras caught police beating and racially abusing a black record producer for not wearing a mask.

“I remember that in January 2020, Macron had already asked the then Minister of the Interior, Christophe Castaner, for proposals to improve the Code of Conduct for Law Enforcement,” Langlois added. “Then in the spring, he asked the government to speed up with ethical rules. However, we are still waiting, so I’m pretty skeptical. “

So what happens now for this big consultation about the police? “Organizing a meeting is easy, but it is more difficult to get concrete reforms out of it,” says Zagrodzki.

“We can make good resolutions, but if they are not applied, they are useless,” agreed Langlois, who does not believe that the current leaders will have a change of heart.

This article has been adapted from the original, which was in French.