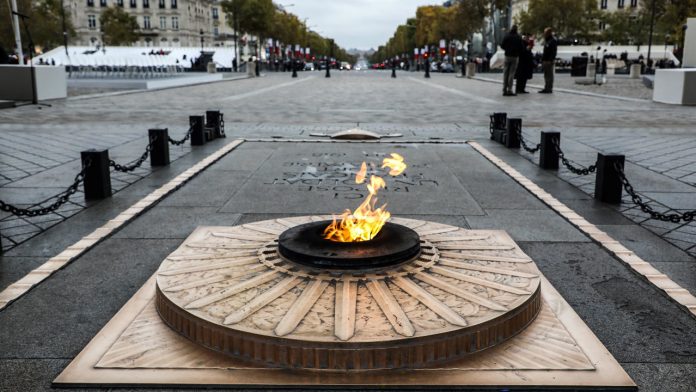 The French president will lay a wreath at the tomb of the unknown soldier to mark the armistice that ended the Great War on the “11th hour on the 11th day of the 11th month” 1918.

French officials will later move the remains of war writer Maurice Genevoix to his pantheon of national heroes, an honor Macron is fighting to encourage the memory of the conflict.

Genevoix wrote five memoirs of his time as a frontline soldier who experienced the horrors of trench warfare in the conflict, which he later collected in a single book “Ceux de 14” (“Men of 14”).

The work is considered by many to be the single largest literary work that has appeared in French since the war of 1914-18, with its raw insight into the experience of warlike comparisons with “Storm of Steel” by the German author Ernst Junger or the English Wilfred Owens poetry.

Maurice Genevoix depicted in an officer’s uniform on the western front. © Private collection of the Genevoix family

It is 102 years since the end of the First World War, an installation by the French composer Pascal Dusapin and the German artist Anselm Kiefer, commissioned by the French Presidency, will also be placed in the Panthéon.

Click on the player above to watch the ceremony live from 11:00.