Home World Macron says he ‘understands’ that Muslims could be shocked by cartoons of...
Facebook
Twitter
WhatsApp
Linkedin
LINE 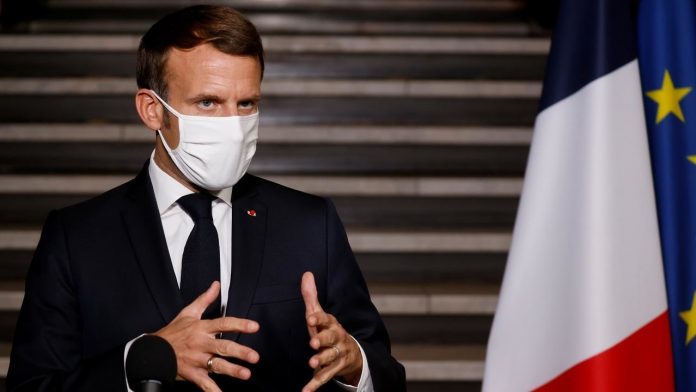 President Emmanuel Macron said he could understand whether Muslims were shocked by cartoons of the Prophet Mohammad as French authorities on Saturday tried to determine whether a young Tunisian suspected of killing three people in a knife-fight inside a church in Nice, had outside help

France is at the forefront after the republicanization in early September of cartoons of the Prophet Mohammad by the weekly Charlie Hebdo, followed by an attack outside its former offices, the beheading of a teacher and now the attack in Nice.

Macron sparked protests in the Muslim world following the assassination earlier this month of teacher Samuel Paty – who had shown his class a cartoon by Mohammad – by saying France would never relinquish its right to caricature.

But in an apparent attempt to reach out to Muslims, Macron gave a lengthy interview that outlined his vision for Qatar-based TV channel Al-Jazeera and tried to strike a softer tone.

“I can understand that people can be shocked by the caricatures, but I will never accept that violence can be justified,” he said.

“I consider it our duty to protect our freedoms and our rights,” he added in an excerpt from the interview, which was broadcast from 6 p.m. 16 GMT (17 Paris time).

‘Too early to say’

France is still struggling with the latest attack in Nice, which Macron has already described as “Islamist” terror.

The attacker, 21, first arrived in Europe from Tunisia last month and, according to prosecutors, killed sixteen, a Brazilian woman and a French woman in the attack in the Notre-Dame basilica on Thursday morning.

He cut the throats of Nadine Devillers, 60, and sixteen Vincent Loques, 55. A Brazilian mother, Simone Barreto Silva, who was stabbed several times, sought refuge in a nearby restaurant but died of her wounds there.

The stabbing attacker was shot by police several times and is currently in a serious condition at the hospital. Investigators have not been able to question him, and his exact motive is still unclear.

“It is still too early to say whether there were other accomplices, what his motive was for coming to France and when this idea took root in him,” said a source close to the investigation, who asked not to be named.

Investigators believe the suspect arrived illegally in Europe on Italy’s Mediterranean island of Lampedusa on September 20. He then arrived at the Italian mainland port of Bari on October 9, before arriving in Nice just one or two days before the attack.

French police are currently holding three people for questioning in the investigation, which focuses on two phones found on the suspect after the attack.

A first man, 47, was detained Thursday night after being seen next to the attacker on surveillance footage the day before the attack.

The second person suspected of contacting the attacker the day before the attack was held on Friday.

Police said Saturday that a third man, age 33, was arrested after being present when the second suspect’s home was raided.

The attack came with France still in shock over the October 16 beheading of teacher Paty by a suspected Islamist radical from Russia’s Chechnya region.

The teacher had shown a class a cartoon of the Prophet Mohammad in the wake of the controversy generated by Charlie Hebdo’s reprint of the cartoons to mark the start of the trial against suspects over the massacre of its staff in January 2015.

Even before this attack, Macron had promised a fierce new campaign against Islamist radicalism that had aroused controversy and condemnation from Muslims around the world.

Protests erupted on Friday in Afghanistan, Pakistan, Bangladesh, Mali, Mauritania and Lebanon, most recently in a series of mass rallies condemning France.

Indonesian President Joko Widodo on Saturday “condemned” Macron’s defense of the right to publish such cartoons.

Foreign Minister Jean-Yves Le Drian warned that French citizens face a security risk “no matter where they are” in the wake of the attack, saying alarms had been sent to all French citizens abroad.

In the suspect’s hometown of Sfax in central Tunisia, his family told AFP they were fighting to believe he had carried out the attack, but relatives said he had turned to religion and isolated himself for the past two years.