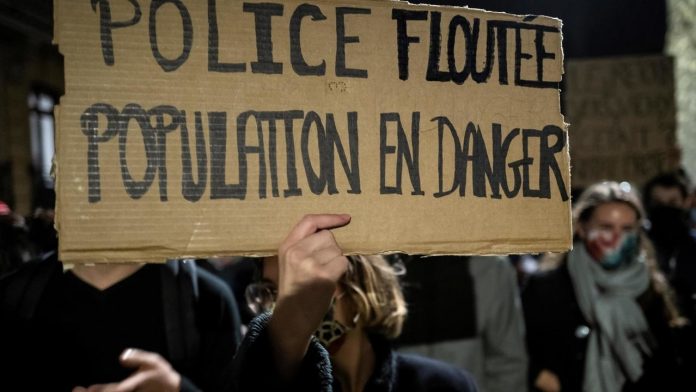 French President Emmanuel Macron is “very shocked” by the images of police beating a black music producer in Paris, a presidential official said on Friday as pressure on the government increased with top politicians and athletes expressing outrage over the incident.

One day after the publication of images of a brutal police beating of a black man triggered condemnation across France, a presidential official said Macron was “very shocked” by the images.

The recording of the police beating music producer Michel Zecler in the 17th arrondissement (district) of the French capital over the weekend was the latest in a series of images of police violence published in recent days. It comes as the government seeks to push through controversial new security legislation that would restrict the media’s right to publish police officers’ faces.

Four police officers were arrested for questioning on Friday over the beating of Zecler, reported AFP and quoted a source close to the matter.

Officials, who were suspended from duty on Thursday, were being held at the National Police Inspectorate General (IGPN), which is investigating allegations of violence by a person with authority and false testimony.

‘Toxic climate’: The scream is growing in France after the police filmed and beat the music producer

In the wake of the latest police brutality scandal, French Prime Minister Jean Castex said he would set up “an independent commission responsible for proposing a new wording of Article 24”.

Article 24 of the “Comprehensive Security” bill, which was adopted during Parliament’s first reading on Tuesday, would criminalize the publication of images of police officers on duty with the intention of harming their “physical or mental integrity”.

Media and human rights groups have raised concerns about the possible impact on journalists covering police operations and warn that the wording is intended to discourage citizens from filming police and holding them accountable.

It has also increased pressure on Interior Minister Gérald Darmanin and raised questions about the future of Paris Police Chief Didier Lallement, who was already in the spotlight after the forced removal of a migrant camp in Paris earlier this week that has been widely condemned.

In an interview with France 2 television, Darmanin said that the officers involved in Zecler’s assault “had soiled the republic’s uniform”.

Zecler was originally arrested for causing violence, but prosecutors threw out that probe and instead began investigating the police themselves.

Macron held talks with Darmanin on Thursday to demand harsh punishments for those involved in the beatings, a government source added.

“Nausea,” the front-page headline of the left-wing daily Libération said of a close-up of Zecler’s swollen and bloody face.

“The new video of a rare atrocity … adds to a problem that has been fueled in recent months by a series of mistakes and a tendency to return to authoritarian tendencies,” it said.

Saturday protest against the security law

The death in the US police prison over George Floyd in May and the Black Lives Matter movement have reverberations in France, where accusations of brutality against police are common, especially in poor and ethnically diverse urban areas.

“Unbearable video, unacceptable violence,” Mbappé wrote on Twitter next to a picture of the injured producer, “Say no to racism.”

A protest against the bill, which has not yet been approved in a Senate vote, has been called for Saturday in Paris.