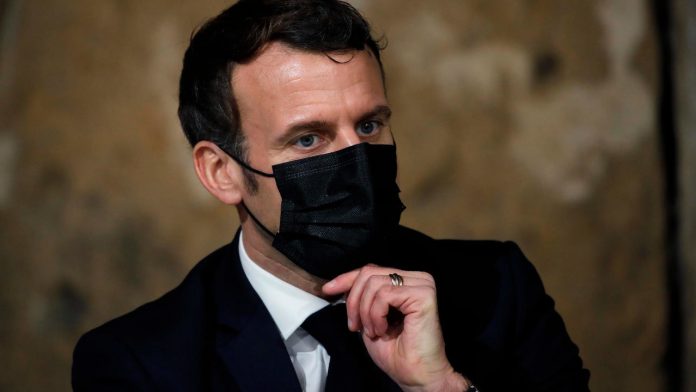 Amid the risks of a withdrawal from a population torn by successive restrictions, the French government is thinking of tougher anti-Covid curbs – including a third shutdown – after acknowledging that a curfew did not suppress the spread of the virus.

When it comes to deciding on new measures to combat the coronavirus pandemic, French President Emmanuel Macron and his government are on a tightrope. Should another nationwide lock – the third in less than 12 months – be introduced quickly for the French, as researchers are advocating? Or should the government wait a few more weeks, or even choose a less strict strategy to not promote a section of the population?

It is a decision that has left the state leaders in difficulty. The French, like so much of the rest of the world, are increasingly succumbing to a generalized state of fatigue after nearly a year of living under Covid-19 restrictions. But government spokesman Gabriel Attal left little room for doubt as to what the government’s next move might be after the Council of Ministers met at the Élysée Palace on January 27 to discuss the pandemic response.

“The curfew at 6 pm has been relatively ineffective. We have information that shows that … at this stage it does not slow down the virus circulation enough,” Attal said. Given this situation, the scenarios range “from maintaining the current framework to a very tight containment”, he added.

On January 28, Minister of Health Olivier Véran spoke about the need to “avoid a pandemic within the pandemic”. He said the virus circulates more widely and spreads faster each week. The effectiveness of the curfew, he added, is now “declining”.

>> Covid-19: Everything you need to know about being vaccinated in France

At the time of the first shutdown, in March 2020, Macron did not hesitate to invoke the military language when he introduced a national shutdown a few days after the closure of schools. “We are at war,” he told the French, who, despite being unaware of the sudden shutdown, were largely willing to comply with the restrictions.

Although today’s discourse has clearly developed, it seems that the government would need to do much more to gain the trust and consent of the French if it decides to close the country again.

“There is a feeling of tiredness, doubt and the need to question, all of this is legitimate. And when making a political decision, you have to take social acceptance into account,” said Christophe Castaner, Speaker of Parliament and head of Macron’s La République en Marche ( LREM) party, France Inter told radio on Wednesday.

‘People can not take it anymore’

The question of social acceptance did not arise until the early 1980s when French politicians considered how to convince the French to be vaccinated. Support for the government’s vaccination campaign was due to acquiring sufficient purchases or social acceptance from the population.

The latest opinion polls, however, show that the French today lag behind social acceptance. “We must be vigilant when it comes to social acceptance, because it is a very important issue, because during the first shutdown it was 85 percent, during the second it was 65 percent, and now it is 40 percent,” a government source told AFP .

When they meet their voters, many politicians may feel that they are no longer in the same mood as last spring. Frustration and fatigue have begun after almost a year when ordinary lives have been maintained.

“We feel that people are much more worried, that they can no longer cope, that they are tense and stressed, especially small shopkeepers who are afraid of not surviving a new lock that is similar to the spring of 2020,” said Caroline Janvier, a LREM MP from The Loiret, told FRANCE 24. “But more than anger, I see problems related to mental health, problems with depression and isolation, especially among the elderly.”

New events in the Netherlands, where a protest movement and riots took place following the announcement of a curfew for Covid-19 last weekend, would not have escaped Macron’s attention. Police arrested 250 people on Sunday night and another 70 on Monday. Prime Minister Mark Rutte called the riots “the worst in 40 years”, in a country that has not seen a curfew since World War II.

Meanwhile in France, the hashtag “#JeNeMeReconfineraiPas” (#I will not go back in lockdown) appeared on Twitter, where it went viral with more than 40,000 parts. Some of the posts also offered civil disobedience.

“Several companies refuse to close anyway. There is a step between explanation and action, but this is also the case for many citizens who have respected everything since March: where is there a place for life in all this? #JeNeMeReconfineraiPas”, wrote Fabrice D on the social network.

It soon triggered an anti-hashtag #JeMeConfinerai (#I will go in lockdown) with a lot of anger reminiscent of the anti-lockdown voices.

The #JeNeMeConfineraiPas, you are not resistant. You were not the more spirited spirits beyond the mass of sheep or what. Most of the times you are just selfish. I’m going to love more #JeMeConfinerai

“#JeNeMeConfineraiPas, you are not a resistance fighter. You are not more aroused spirits among a lot of sheep or whatever. For the most part, you are just selfish, ”wrote @JonBelh

Fear of risks is much less present

In March last year, fear and uncertainty over the new coronavirus meant that the French were willing to follow strict antiquated rules, but attitudes have changed since then.

The government is struggling with a health crisis that is growing, but not exponentially enough to secure the public and even political consensus on the best way to flatten the virus curve.

France reported 27,169 new cases of coronavirus on Wednesday, the largest one-day jump since mid-November when a second deadlock was in place. Of these cases, 3,107 were in intensive care units, according to the Ministry of Health. The mood for new daily deaths reached 350 and the total number of deaths caused by the pandemic in France was 74,456. The figure is lower than in the UK, which has a comparable population and which on Tuesday was the first European country to surpass the dismal milestone of 100 000 Covid deaths.

The new UK iteration of the virus is more transmissible and could trigger a “very significant” increase in the number of patients in the immediate future, according to doctors from the Assistance Publique-Hôpitaux de Paris, the university hospital trust in Paris and its environment. In Paris, 9.4 percent of the cases detected between 11 and 21 January were of this more contagious variant.

“If we are forced to introduce a new suspension, we must have the right words to explain it and justify its implementation,” a adviser to senior government ministers warned in an interview with AFP.

Since the government is considering whether to risk civil disobedience by introducing another lockdown, it is unlikely that Macron will announce the state’s next move before Saturday, two weeks after the curfew was extended. It will also give the French president time to defy critics who have accused him of circumventing consultations and acting alone on decisions relating to the Covid crisis. He has asked Prime Minister Jean Castex to conduct an “in-depth consultation” with officials, advisers and other stakeholders on the various Covid strategies on the table ahead of his expected announcement of changes by the end of the week.

This article was adapted from the original in French by Nicole Trian.