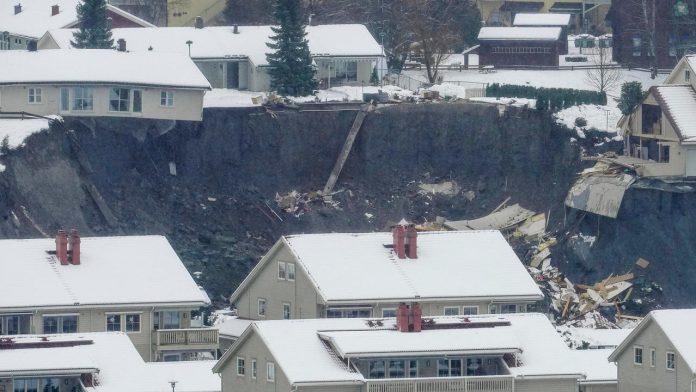 A major landslide destroyed homes overnight in a village in Norway near the capital Oslo, leaving at least 11 people unaware and ten injured, police and local media said on Wednesday.

Video footage from the scene showed that an entire slope had collapsed in Ask, in the municipality of Gjerdrum, 25 kilometers northeast of the capital. Homes were left crushed and buried in dark mud.

The snow fell all morning when the rescue service evacuated the injured and tried to secure the homes that are still standing. Some houses had been left on the edge of the crater that the frame left, with some falling over the edge as the day went on.

Norwegian Prime Minister Erna Solberg, who traveled to the village with about 1,000 people on Wednesday, described the landslide as “one of the largest” the country had seen.

“The situation is still so unstable with mud that it is not yet possible to do anything other than helicopter rescues,” she added.

Norwegian media said that 700 people had been evacuated from their homes, and the municipality warned as many as 1,500 might need to leave the region for security reasons.

Some are still missing

Around 20 (1900 GMT), police said 11 people were still not reported, based on residents registered in the area, some of whom were missing children.

“We believe that there are people in that landslide area, but whether it is the 11 or less, we can not determine with certainty,” says operations manager Roger Pettersen to the broadcaster NRK.

In a statement published online, the police also emphasized that the figure was uncertain and could both go down and up because they were unsure that some visitors had been in the home.

The search would continue overnight as police used helicopters and drones equipped with thermal cameras.

Police said that ten people were injured, one of whom was transferred to Oslo with serious injuries.

“The police describe this as a disaster,” Pettersen told the broadcaster NRK earlier in the day.

Emergency calls had come in from people who said the whole house was moving, he said.

“There are dramatic reports and the situation is serious,” Pettersen said.

According to the Norwegian Water Resources and Energy Directorate (NVE), the so-called “quick clay slide” took place at approximately 300 x 700 meters (328 to 766 yards).

“This is the largest landslide in recent times in Norway, given the number of houses involved and the number of evacuees,” NVE spokeswoman Laila Hoivik told AFP.

Rapid clay is a type of clay found in Norway and Sweden that can collapse and turn into liquid in the event of overload.

“The area has been mapped before and is known to include speeding. The possibility of similar large images in the area is currently low, says Hoivik.

“We will help with the search for missing persons and safe buildings,” Operations Manager Stefan Karlsson from Gothenburg’s rescue service told the newspaper.

King Harald of Norway said in a statement that the accident “had made a deep impression on me and my family.

“My thoughts are with all those affected, the injured, those who lost their homes and are now living in fear and uncertainty about the full extent of the disaster,” he said.