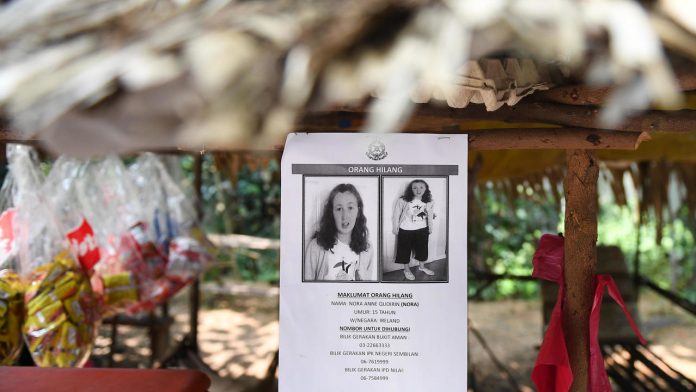 A Malaysian court judge ruled on Monday that the death of a French-Irish teenager whose body was found near a Malaysian jungle resort where she disappeared while on holiday was likely a “misunderstanding” that did not involve other people.

Coroner Maimoonah Aid ruled out murder, natural death and suicide and said Nora Anne Quoirin was likely to get lost after leaving her family’s cottage on her own.

“After hearing all the relevant evidence, I decide that there was no one involved in Nora Anne’s death,” she told a court in the Malaysian city of Seremban.

“It’s more likely than not that she died by mistake.”

The 15-year-old disappeared at the Dusun eco-resort in the southern state of Negeri Sembilan on August 4, 2019, a day after the family arrived for a holiday. After a massive search, her naked body was found on August 13 next to a stream on a palm oil farm about 2.5 kilometers from the resort.

The police thought she was climbing out of the cottage window on her own, with no evidence of any trouble. But the teenager’s parents said she was probably kidnapped because she had mental and physical disabilities and would not have walked away on her own. They told the inquiry that a third party could have dumped her body in the area after the search for her.

Quoirin’s mother watched the court proceedings online from London and bowed her head when the verdict was announced, and the coroners also said that there were no signs that the 15-year-old was murdered or sexually abused.

The family was “jet lagged and tired”

Coroner took two hours to decide the verdict, going through testimonies from over 40 witnesses presented during the investigation from the end of August to December.

Nora Anne was only wearing lingerie when she disappeared, but her body was found naked. Coroner noted the family’s claim that this gave credence to the possibility of sexual assault but said that a comprehensive autopsy could not find any such evidence or proof of battle marks or suffocation.

Maimoonah instead focused on the fact that the family was probably exhausted after a long journey from the UK and activities at the Dusun resort on the day of arrival in August 2019.

“The family (was) all jet-lagged and tired,” she said. “Nora Anne had also shown that her fatigue was increasing.”

This made it probable that the teenager in a “strange and new place” had wandered out of the family’s accommodation on his own the first night in the village, she said.

Maimoonah also noted that the teenager’s mother said she could climb the stairs on her own, suggesting that she herself might have gotten out of their cabin.

Slow accusations from the police response

During the investigation, the teenager’s parents said they heard mysterious “muffled sounds” coming from the apartment at night until the schoolgirl’s disappearance, which favored their belief that she was jerking.

In their testimony, the police reiterated their view that the teenager had walked alone and defended their approach and insisted that a thorough search be conducted.

But her parents painted a different picture and strongly criticized the authorities for their response to her daughter’s disappearance.

The five-hectare resort is located next to a thick jungle and at the foot of a mountain range.

The teenager had a condition called holoprosencephaly, in which the brain does not develop normally. She had limited verbal communication and could only write a few words.

She went to a school for young people with learning difficulties.

A British pathologist who performed a second autopsy on Nora Anne’s body in the UK testified that he agreed with the Malaysian findings that she died of intestinal bleeding due to starvation and stress. However, he said he could not completely rule out sexual abuse due to severe body degradation.

Her mother had testified that a cottage window with a broken latch was found opened the morning Nora Anne disappeared, but the trial said she could have accidentally postponed it.

Rescuers may have overlooked Nora’s body due to the thick jungle terrain, Maimoonah added. The autopsy estimated that she died between two and four days before her body was discovered.

A total of 49 witnesses have testified in 24 days since August last year via video conferencing due to the coronavirus pandemic.

France also launched a criminal investigation into the death in August 2019. French prosecutors regularly launch investigations into cases involving French citizens abroad. Nora’s mother is from Belfast while her father is French.