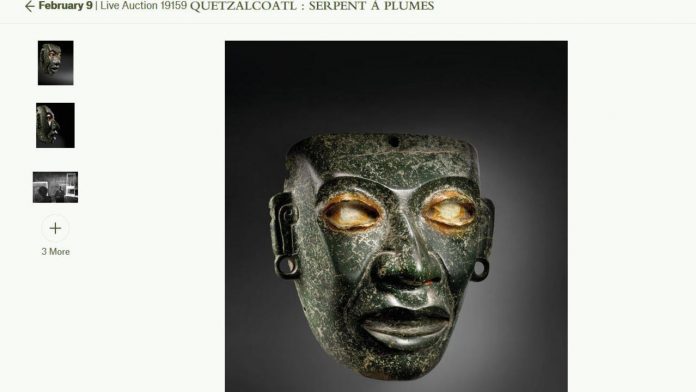 Mexican officials said Tuesday that the country had filed a protest with the French government over a planned auction in Paris of pre-Hispanic sculptures and other objects, challenging the authenticity of several objects.

The Mexican National Institute of Anthropology and History said it also filed a criminal case, claiming that it is illegal to export or sell such pieces.

Christie’s of Paris says that on February 9, 39 items will be auctioned, including a 1,500-year-old stone worm from the ancient city of Teotihuacan, valued at up to 550,000 euros, and an equally ancient statue of the fertility goddess Cihuateotl, allegedly from Totonaco culture.

The director of the Mexican Institute, Diego Prieto Hernández, said about 30 of the pieces appear to be genuine, but he accused the auction house of also posting some forgeries.

“The dispute is not with France or with the French government, but rather with an act of commercialization that should not happen,” said Prieto Hernández.

His institute has asked the Mexican Foreign Ministry to restore the items.

Some of the pieces appear to have been in France or other parts of Europe for many years. It was not clear about their ownership before the 1972 Mexican law banning exports or sales.

However, said Prieto Hernández, “the Mexican government does not accept and will never accept looting and illegal sale of national heritage.”

In 2019, Mexico failed in its attempts to stop another French auction house sale of about 120 pre-Hispanic items. The Millon auction house sold many of these pieces far above their estimated pre-sale prices.