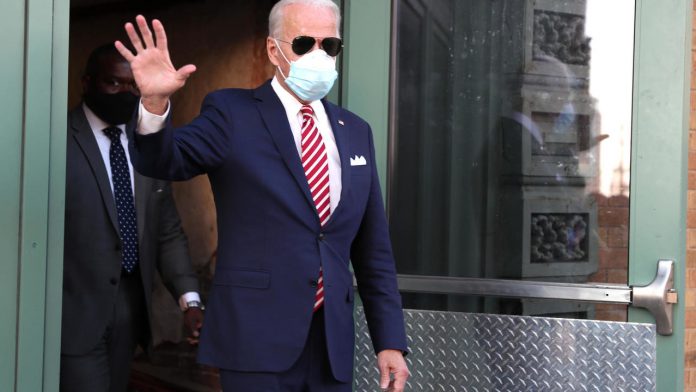 Elected President Joe Biden said on Monday “more people could die” if outgoing President Donald Trump continues to block efforts to plan for a US transfer of power as the coronavirus pandemic worsens, adding he would not hesitate to get vaccinated.

Biden also said that business leaders and supervisors had signaled their willingness to work together to fix the pandemic US economy, but stressed that COVID-19 must first be brought under control and called on Congress to pass aid legislation.

The Democratic president-elect gave a speech and took questions from journalists in Wilmington, Delaware, after consulting with the CEO’s leading American company and supervisor on Monday.

He welcomed further progress in COVID-19 vaccine development. Biden said the CEO and supervisor were “ready to meet” and that “the unit was amazing.” Biden will inherit an economy that has suffered millions of jobs during a pandemic that has killed more than 246,000 people in the United States. US COVID-19 cases increase as Biden prepares for access on January 20.

“We are entering a very dark winter. Things will get much tougher before they get easier,” Biden said of the pandemic.

In response to a question about the consequences of the Trump administration not cooperating with the Biden Transition Team to fight the pandemic, he said: “More people could die if we do not coordinate.”

“When you fight COVID, we need to make sure companies and workers have the tools, resources and national guidance and health and safety standards to function safely,” Biden added.

Biden said it would be much easier for the presidential transition if Trump cooperated, but said of the current refusal to admit: “I think this is more embarrassing for the country than weakening my ability to get started.”

He called for bipartite cooperation against the pandemic and called on Congress to adopt pandemic relief legislation. Talks on such legislation stopped for months before the November 3 election.

Biden said that coronavirus continues to spread “almost undiminished” and that it was state governors who took off.

On other economic issues, Biden said he plans to pursue a “fairer tax structure” with companies paying their fair share, adding that he wanted to see a minimum wage of $ 15 per country. Biden said no government contracts will be awarded to companies that do not manufacture products in the United States.

Biden told reporters he made it clear to companies at the video conference that he is a “union guy”.

Biden earlier on Monday said that Moderna Inc’s announcement that its experimental COVID-19 vaccine was 94.5% effective based on interim data from a late-stage trial gave new hope of beating the coronavirus. Along with positive results last week on a rival Pfizer Inc shot, Moderna’s news added to optimism that extensive vaccination in the coming months could help tame the pandemic.

Asked if he would personally be willing to be vaccinated with one of the newly developed shots, Biden said, “I would not hesitate to get the vaccine.”

“They seem to be ready for the best time, ready to be used,” Biden said of the two vaccine candidates.

Biden also urged Americans to limit the number of people at gatherings for next week’s Thanksgiving holiday, with social distancing and masks encouraged.

Unlike in 2008, when the country elected Democrat Barack Obama and his ruling partner Biden as the global economy struggled from the subprime mortgage crisis, the worst of the current economic downturn may have passed. Unemployment has fallen sharply from a peak in April of 14.7% to 6.9% and is expected to fall further next year.

Trump is digging in

Biden went ahead with financial planning even when Republican Trump on Monday again refused to accept his election loss. Trump’s national security adviser, Robert O’Brien, said on Monday that he was prepared to ensure a professional transfer to Biden’s team.

“If the Biden-Harris ticket is determined to be the winner, and things obviously look like that now, we will have a very professional transition from the National Security Council, there is no doubt about that,” O’Brien said.

Biden beat Trump by the same margin of 306-232 in the State-by-State Electoral College that prompted Trump to declare a “landslide” victory in 2016. Biden also won the national referendum by at least 5.5 million votes, or 3.6 percentage points. , with some votes still being counted.

Trump has so far made no progress on legal challenges in several states.

Election officials from both parties have said there are no signs of serious irregularities. Federal security officials for the election have dismissed “unfounded allegations” and expressed “utmost confidence” in the integrity of the election.

Trump suffered another setback when James Bopp, a Conservative lawyer, on Monday voluntarily withdrew lawsuits filed in federal courts to prevent the states of Georgia, Michigan, Pennsylvania and Wisconsin from certifying their election results. The trials made unjustified allegations of illegal voting.