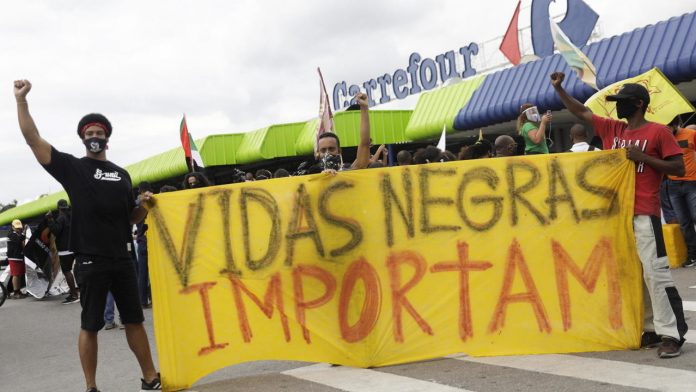 New anti-racism demonstrations took place on Sunday outside the Carrefour supermarkets in Brazil to protest the death of a black man by white guards at a shop in Porto Alegre.

A video taken Thursday night in the southern city showed 40-year-old welder Joao Alberto Silveira Freitas repeatedly being punched in the face and head by a security guard while being held back by another at a Carrefour market.

The clip quickly went viral on social media and triggered a first round of demonstrations on Friday when the country marked Black Consciousness Day.

More protests were held on Saturday when Silveira Freitas was buried.

In Rio de Janeiro on Sunday, about 100 protesters gathered at a shopping center where one of the French group’s supermarkets is located, AFP journalists reported.

Other protests led to dozens of people demanding a boycott of Carrefour in various parts of the country, such as Salvador de Bahia or Santos.

Rio protesters carried banners with the text “Murderous Carrefour” and “Black Lives Matter”, with slogans that were prominent in the United States during demonstrations against recently killed police officers on minorities.

In a series of tweets in Portuguese on Friday, Carrefour’s CEO Alexandre Bompard expressed his condolences over the “horrific act” and said the images were “unbearable”.

He also commissioned “a full review of training for employees and outsourced staff on issues related to safety, respect for diversity” and “rejection of intolerance.”

However, Djefferson Amadeus of the Institute for the Defense of the Black People, who demonstrated on Sunday in Rio, said “we no longer accept these excuses. They have promised us action, but so far we have not seen anything.”

Other protesters reiterated his concern.

“We will not shut up as they continue to kill our people,” said Thais dos Santos, 23.

“This shows that racism is still very much present in Brazil, not only in the supermarket but also in the favelas,” he added, referring to Rio’s poor district.

On Saturday, in his speech at a virtual G20 summit, President Jair Bolsonaro again downplayed structural racism in Brazil, a country where about 55 percent of the population of 212 million identify themselves as black or mixed race.

The right-wing leader condemned “those who want so much conflict and discord” by trying to “import” tensions into the country “which is not part of its history.”