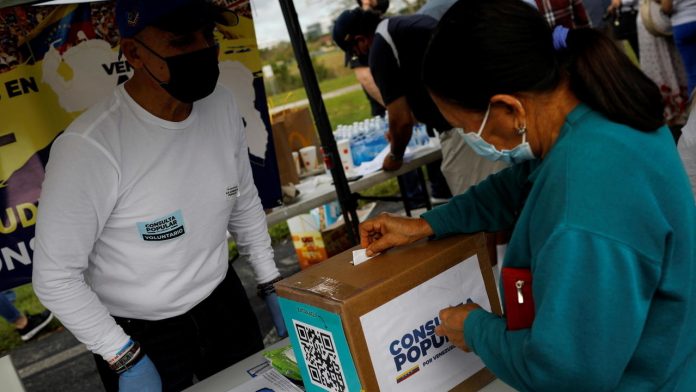 Venezuela’s opposition ended a “popular consultation” on Saturday, in a symbolic vote hailed as “historic” by the organizers, but which did not prompt the massive mobilization seen during protests last year.

The consultation followed the legislative elections in Venezuela on December 6 – boycotted by the opposition – which gave President Nicolas Maduro a total grip on power.

According to organizers on Twitter, 6.4 million people participated in the opposition consultation, which began on Monday.

They included 3.2 million personally in Venezuela, 844728 abroad and a further 2.4 million online.

They said that 87.44 percent of the votes had been counted.

“Participation in the consultation far exceeded the fraud” established by the government on December 6, said opposition leader Juan Guaido.

He also condemned the government’s “censorship” and the lack of support from the country’s television media.

But despite the figures from the opposition, this week’s survey did not see the massive mobilization seen during the protests from 2019.

Guaido declared himself acting president in January of that year and accused Maduro of stealing the 2018 election.

The United States and about 50 other countries have recognized Guaido as president.

The opposition leader, who remains the speaker of the National Assembly until January 5, led the boycott of the election on December 6. Several international powers also tossed the ballot like a farce.

Asked if they reject elections

In this week’s consultation, Venezuelans were asked whether they supported “all mechanisms of national and international pressure” in favor of “free presidential and legislative elections.”

It also asked if they rejected the election on 6 December.

The consultation began online on Monday and was conducted in person on Saturday at almost 3,000 locations across the country.

The opposition claimed “threats” and threats from pro-Maduro groups around certain places planned for the consultation.

In the rich district of Chacao, traditionally an opposition stronghold, Jose Nelson Castellanos said he had voted to express his rejection of Maduro, in power since 2013 following the death of his mentor, Socialist President Hugo Chavez.

“If we are not happy with the situation in the country, we must do something,” said the 56-year-old.

“I know a lot of people … are already skeptical of the results, but something needs to be done.”

Maduro has minimized the importance of the consultation and described Guaido as an American “puppet”.

The victory of Maduro’s ruling Socialist Party in the December 6 election gave him control of an expanded National Assembly with 227 seats.