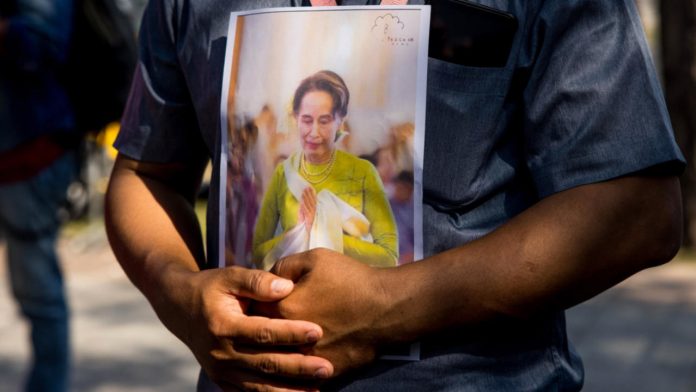 Myanmar’s sacked leader Aung San Suu Kyi will be detained for questioning until February 15 after police on Wednesday charged the former Democrat with the illegal import of communications equipment.

Myanmar’s army seized power on Monday, holding Nobel laureate Suu Kyi and shortening the transition to democracy in a takeover that has condemned the United States and other Western countries.

A police inquiry to a court describing the allegations against 75-year-old Nobel laureate Suu Kyi said that walkie-talkie radio had been found in a search of her home in the capital Naypyidaw. It said the radios were imported illegally and used without a permit.

A separate document showed that the police filed charges against the dismissed President Win Myint for crimes under the Disaster Management Act.

A spokesman for Suu Kyi’s National League for Democracy (NLD) confirmed the allegations in a Facebook post.

“We have received reliable information that the Dakhinathiri Court has given a 14-day detention from February 1 to February 15 against Daw Aung San Suu Kyi on charges of violating import / export laws,” wrote Kyi Toe, NLD Press Officer. on his official Facebook page.

Suu Kyi endured about 15 years of house arrest between 1989 and 2010 when she led the country’s democracy movement and she is still hugely popular at home despite the damage to her international reputation due to the flight of Rohingya Muslim refugees in 2017.

Army Chief of Staff Min Aung Hlaing took power on Monday over alleged fraud in the November 8 election, which the NLD won in a landslide. The Electoral Commission had said that the vote was fair.

The military’s actions have been met with a growing chorus of international condemnation, although options are limited for those nations hoping Myanmar’s generals can reverse course.

On Tuesday, the US State Department formally declared the takeover a coup, which means that the US can not help the Myanmar government.

However, all the consequences will be mainly symbolic, as almost all aid goes to non-governmental units and Myanmar’s military was already under US sanctions over its brutal campaign against the Rohingya minority.

The UN Security Council held an emergency meeting on Tuesday but could not agree on a statement condemning the coup, as China, Myanmar’s main supporter, vetoed all such measures.