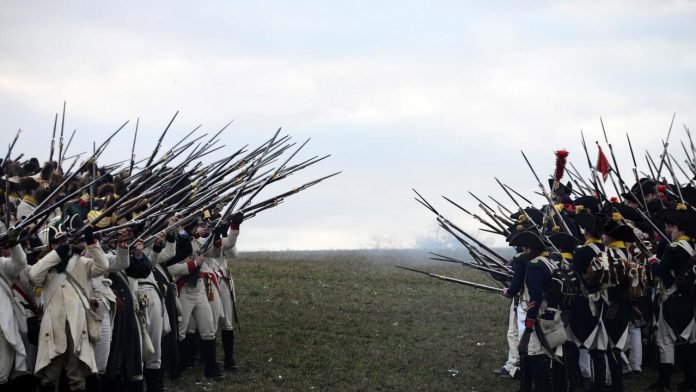 Napoleon Bonaparte’s account of his victory at the Battle of Austerlitz, dictated during his exile on the island of Saint Helena, went on sale on Wednesday in Paris for one million euros ($ 1.2 million).

The account of the “three-emperor collision” of 1805 with Russian-Austrian forces, which is considered Napoleon’s greatest military victory, takes readers through preparations for the battle, the battle itself, and is supplemented by a battle plan drawn up by his loyal aides. camp General Henri-Gatien on tracing paper.

The tightly packed 74-page manuscript, dictated to Bertrand, contains several corrections by the exiled emperor, which cross out words and add comments to the margins in small print.

Napoleon does not refer to himself in the first person, but instead to his comments with “the emperor says”.

The sale comes at the beginning of a year that marks the second anniversary of Napoleon’s death.

Gallery owner Jean-Emmanuel Raux, a collector of French imperial memorabilia, found the manuscript in a mass of documents belonging to Bertrand’s heirs.

“It is the most amazing document on French history that you can find in a private collection,” he told AFP.

His daughter Alizee, who studied the manuscript in detail, said it was an “ornate account of the battle.”

Within about nine hours on December 2, 1805, about 75,000 soldiers from Napoleon’s “Grande Armee” overpowered a large Russian-Austrian force at Austerlitz, in the then Austrian Empire.

It helped end the coalition between Francois I of Austria and Tsar Alexander I of Russia, which had been funded by Britain – and is a battle that has been studied in French military schools to this day.

Napoleon describes all the tactics he used to trick his opponents into believing that French forces were weak – including previous retreats and negotiations that disguised the fact that he had already chosen the site of the battle.

His exalted account is based on the heroism of the French, from troops to officers, and claims that even wounded soldiers praised the emperor.

“I will lose a large number of brave men,” he said before the battle. “I feel bad because they really feel like my children, and in fact I sometimes mock this feeling because I fear it will leave me unqualified for war.”

The manuscript will be on display until the end of the month in the Paris Gallery Arts et Autographes, as well as online for potential foreign buyers.

The sale is part of the art fair “BRAFA in the Galleries” which takes place in 126 galleries in 13 countries from 27 to 31 January.

Collectors can arrange to view the manuscript in person or via the internet.