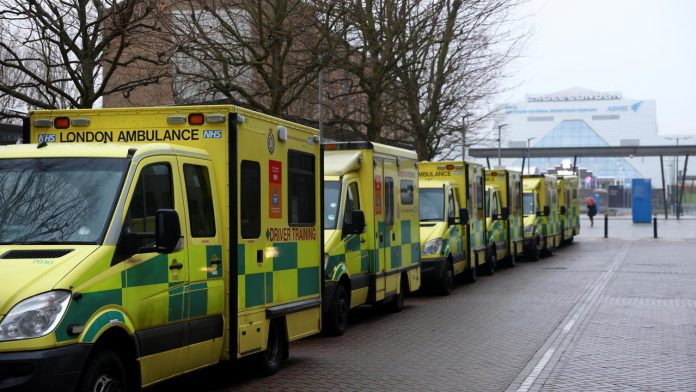 The new, more contagious strain of Covid-19 that first appeared in the south-east of England already spread rapidly even during the country’s second lock-in in November, according to a report published on Thursday by researchers at Imperial College London.

A report by researchers at Imperial College London released on December 31 estimated that the new coronavirus strain tripled the number of infections in England during the lock-in in November, while the number of new cases caused by the previous variant decreased by a third.

The new strain recorded a higher reproduction rate (R) – which determines how contagious a disease is based on the number of people infected by each infected person – at 0.7 versus 0.4 for the previous strain, even with “high levels of social distancing” “during the shutdown before Christmas.

An R frequency must be less than 1 for the number of new cases to start falling. The UK Government’s most recent estimate of the R ‘rate for the UK as a whole, published on 23 December, was between 1.1 and 1.3.

The emergence of the new Covid-19 strain prompted more than 50 countries to impose restrictions on the UK at the end of December, many of which were subsequently lifted. France reported its first case of the new variant on its land on 25 December.

“There is a huge difference in how easily the variant virus spreads,” Axel Gandy, a statistician at Imperial College London and co-author of the report, told the BBC. “This is the most serious change in the virus since the epidemic began,” he said.

Imperial College research also found that the new tribe originally spread the fastest among people under the age of 20, but it then began to spread to other age groups.

“The early data were collected during the November lock-in where schools were open and the activities of the adult population were more limited,” Gandy said. “We now see that the new virus has increased infectivity in all age groups,” he continued.

The government reintroduced lock-in measures in areas covering 78 per cent of the English population on Wednesday, while regional authorities in Scotland, Wales and Northern Ireland have also reinstated containment measures.

Intensive care units in London and the surrounding south-eastern region exceeded their capacity on December 29, with occupancy up to 114 and 113 percent, respectively, according to NHS data leaked to the special publication Health Services Journal. In response, the government activated one of its Nightingale hospitals – designed to deal exclusively with Covid-19 patients and thus take the pressure off congested hospitals – in London on 31 December.

The Imperial College report suggested that keeping schools closed after the Christmas weekend will help prevent the spread of the virus: “A particular concern is whether it will be possible to maintain transmission control while schools can reopen in January.” The government has extended the Christmas weekend to January 11, when high schools in England are planned to resume the classroom. Students return to English primary schools on January 4, except in the most serious virus hotspots, including London.

It is “inevitable” that schools will have to stay closed to stop the new Covid-19 variant that is out of control, Deepti Gurdasani, clinical epidemiologist and senior lecturer at Queen Mary, University of London, told the Financial Times.

The death toll from Covid-19 reached 981 on Wednesday, the highest daily rate since the coronavirus first increased in the spring. In total, the UK has seen more than 2.5 million confirmed cases of coronavirus, while its death toll is more than 74,000, the second highest in Europe after Italy and the sixth highest in the world.

The government will need to speed up the roll-out of vaccines if it wants to include the new Covid-19 strain, its scientific advisory committee suggested on December 22, warning that “current vaccination levels are unlikely to change the epidemiology of the virus”.

The United Kingdom was the first Western country to approve both Pfizer-BioNTech and Oxford-AstraZeneca jabs for emergency use. Authorities have so far distributed one million vaccines, Health Secretary Matt Hancock wrote in a tweet. More than 940,000 people have had their first job, the BBC reported.