Home World No, Iranian tourists did not go to watch a skirmish between Armenia...
Facebook
Twitter
WhatsApp
Linkedin
LINE 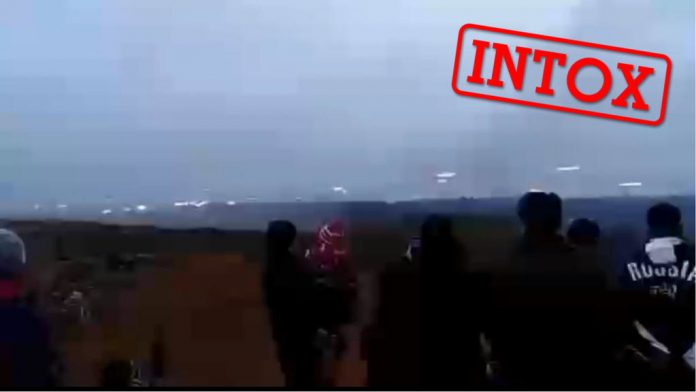 Thousands of people took to social media in October to share an amateur film they believed showed Iranian tourists standing on top of a mountain watching rocket exchanges between Azerbaijan and Armenia, which are locked in conflict over the disputed Nagorno-Karabakh region. . But in fact, the video shows a military exercise organized by the Russian army in November 2019.

This video was published by an English-speaking blogger on Twitter and shared on a Spanish-language page on Facebook that claimed to be a news page. Together, the two publications received more than 200,000 views and were shared more than 6,000 times in total. Both of these posts claim that the video shows Iranian tourists traveling to the border that they share with the two warring parties to see them exchange rocket fire. The Azerbaijani and Armenian Armed Forces have been in conflict in Nagorno-Karabakh since 27 September 2020.

The Iranians stood on top of the mountain and watched the war between Azerbaijan and Armenia shoot rockets at each other as if they were watching a cracker show. Both countries have borders with Iran. pic.twitter.com/LJJkMGpolV

“The Iranians stood on top of the mountain and watched the war between Azerbaijan and Armenia shoot rockets at each other as if they were watching a cracker show. Both countries have borders with Iran ”, reads the caption of this video which was published on Twitter on October 21 and which received more than 80,000 views.

”[A scene] which attracts tourists: people go to the top of a mountain to watch the war between Azerbaijan and Armenia, “says this post in Spanish, which was published on October 10 and shared more than 6,000 times.

The first clue to the real origin of the video comes after four seconds when you see a man wearing a jacket embossed with the word “Russia”.

We took a screengrab 10 seconds into the video and ran it through a reverse image search on the Russian search engine Yandex (see our article to find out how). When we did that, we pulled up an earlier publication of the same video, published on YouTube on November 27, 2019 with a text in Russian that says “BM-21 GRAD – Rapid Fire”, which is a type of rocket.

The Indian fact-checking platform Altnews said that this video was filmed during an exercise to celebrate Missile Forces and Artillery Day, which is celebrated in Russia every year on November 19.

We also pulled up an article on the Russian news site Russia Beyond, dated November 17, 2019, which mentions Russian citizens who gather to watch a rocket be launched from the Russian military base Lushki.

Conclusion: This video has nothing to do with the conflict between Armenia and Azerbaijan in Nagorno-Karabakh. This is an old video filmed in Russia 2019 during an exercise conducted to honor the day of missile forces and artillery.

This article was written by Omar Tiss.