Home World No, the flight crew did not stop a Capitol rebel from boarding...
Facebook
Twitter
WhatsApp
Linkedin
LINE 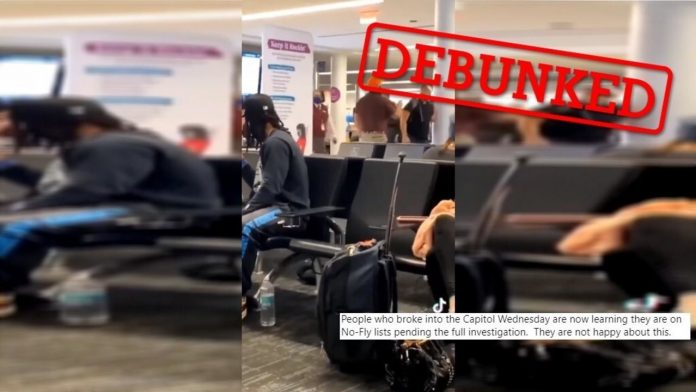 Facebook and Twitter users have circulated a video that they claim shows the airline’s staff stopping a man from boarding a plane because he took part in the uprising at the US Capitol on January 6. But the real story behind the video, which first appeared on TikTok on January 10, shows that the man was asked to get off from Charlotte for the Denver flight because he refused to wear a mask.

This 18-second video shows a visibly distressed man complaining that he was not allowed to take his flight.

“This is what they do to us! They kicked me off the plane!” says a man who uses obscenities and is visibly distressed.

First, another passenger and then one of the flight crews seem to be trying to calm him down.

The video was widely shared online by people who linked the incident to the deadly attack by Donald Trump’s supporters on the US capital on January 6.

On January 10, this video was published on Twitter with the text: “People who broke into the Capitol on Wednesday [Editor’s note: January 6] are now learning that they are on No-Fly lists pending the full investigation. They are not happy with this. ”

The post has since been retweeted about 107,000 times. However, the Twitter user posted an update in a second tweet shared on January 12, explaining that the story he had originally shared was not actually correct.

But that did not stop the fake version of events from spreading online. Several Facebook users shared the same video and copied the text of the first tweet word for word. One of these posts from January 11th received more than 400,000 views.

The false information was also circulating in both Portuguese and French.

Why is it fake?

The name of the user who first published it (@heartlessputa) appears in the video next to the logo of the TikTok application. The username has since been changed. We looked at this account to find the original video published here and immediately noticed that the caption differs from the caption of the posts circulating on Facebook and Twitter. It says the man was prevented from boarding … for refusing to wear a mask.

Fact check on USA TODAY reported that the person who published the video responded the next day to the many rumors about her post. She said she did not know why the man was not allowed to take his flight. But she added that the incident took place in Charlotte, North Carolina, and not in Washington DC, where the Capitol is located.

Derek Walls, a spokesman for American Airlines, confirmed to the United States today that the passenger in question was asked to disembark from his flight to Denver because he refused to wear a mask. USA TODAY reported that similar incidents had taken place at Washington DC airport on flights operated by both American Airlines and Delta Air Lines.

Two other videos published on TikTok on January 9 (check them out here and here) showing women being stopped at an airport were also incorrectly associated with the violence at the Capitol.

Again, the person who shared these videos published an update shortly after their original post, explaining that the films were actually filmed in Fort Lauderdale, Florida in November 2020 and thus have nothing to do with the violence at the Capitol. .

Were Capitol rioters really put on a “no-fly list”?

The Transportation Security Administration (TSA) investigated whether Capitol rioters should be added to the no-fly list it runs with the Federal Bureau of Investigations (FBI), according to an article published by the Associated Press on January 16.

The FBI is also considering listing some of those who attacked the Capitol without a plane, said Steven D’Antuono, deputy director of the FBI Washington Field Office.