Home World No, these pictures do not show the destruction of an airport in...
Facebook
Twitter
WhatsApp
Linkedin
LINE 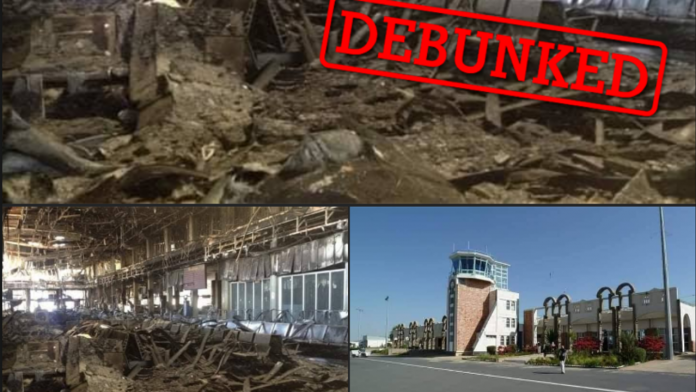 Aksoum Airport, located in the Tigray region of Ethiopia, was injured, according to the Ethiopian news agency ENA, on November 22 as part of the ongoing conflict between the Ethiopian army and the separatist Tigray People’s Liberation Front (TPLF). However, some of the images circulating online that are said to show the airport were actually taken during conflicts in Libya and Ukraine.

On November 22, the Ethiopian National Press Agency ENA reported that Aksoum Airport in the northern province of Tigray had been destroyed by “TPLF extremists”, or members of the Tigray People’s Liberation Front. The Ethiopian army has led an offensive against this group for the past three weeks.

On the same day, photos were shown showing the damaged interior of an airport terminal hundreds of times on Facebook. In the post, the user regrets the destruction of Aksoum Airport.

However, a reverse image search (click here to find out how) quickly shows that these images are not actually from Aksoum Airport. The first two pictures show Tripoli airport in Libya. They were taken by journalist Marine Olivesi on September 2, 2014:

This screenshot shows the article published by The World which includes the image of the destroyed airport in Tripoli, Libya in September 2014. © Marine Olivesi

This Facebook post from November 22 also claims that pictures are being shown at the destroyed airport in Aksoum.

But the picture below is actually a picture of Donetsk airport in Ukraine. It was taken from a video filmed by CNN correspondents on February 2, 2015. The Facebook page Sidaama Today was quick to criticize the misuse of this image out of its original context.

This is a screenshot of a video filmed by CNN at Donetsk airport in Ukraine in 2015. © CNN

The airport terminal is still standing

Pictures published on YouTube on November 23 by the TV channel Addis Media Network show debris on the runway at Aksoum Airport. However, you can see that the terminal building is intact.

Aksoum Airport has only one terminal, which is shown on the website Sleepinginairports.

The landing strip at Aksoum Airport was really damaged; However, some images that people have circulated on social media claiming to show a damaged terminal actually show other airports destroyed during previous conflicts in Ukraine and Libya.

On November 4, Ethiopian Prime Minister Abiy Ahmed launched an offensive against the TPLF, which sought to separate in September, in the Tigray region. A wave of refugees fleeing the fighting crossed the border into neighboring Sudan. On November 23, Abiy gave the TPLF an ultimatum and told them they had three days to give up. The fact that internet and telephone connections in the region have been shut down makes it extremely difficult for the media to cover the conflict.

After helping to overthrow the Marxist military Derg regime in the late 1980s, the TPLF held power in Ethiopia for more than 30 years. Abiy, the first Prime Minister of Oromo’s ethnic minority, took office in 2018 and won the Nobel Peace Prize in 2019 for his work to promote reconciliation between Ethiopia and the Eritrean neighborhood. Abiy’s reform – based agenda has clashed with the deep – rooted TPLF military and economic influence in government institutions and has led to growing tensions between the government and this group.