Home World No, this photo does not prove that Trump will declassify secret documents
Facebook
Twitter
WhatsApp
Linkedin
LINE 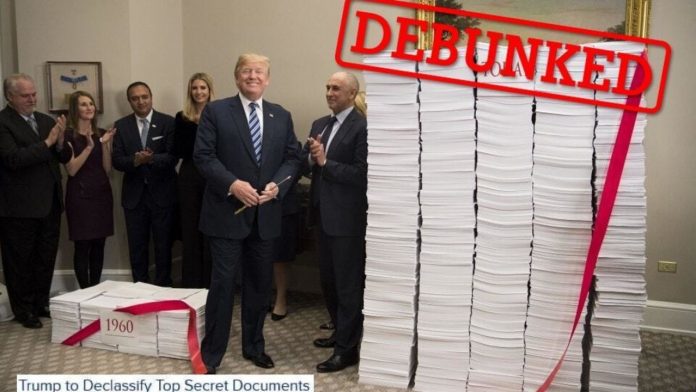 A Facebook post published on January 16 claimed that former US President Donald Trump was about to declassify a large number of documents in order to “reveal them to the world”. The post, which features a photo of the president posing next to piles of paper, was shared more than a thousand times the day before his successor, Joe Biden, took office. It turns out, however, that this photo is old and has nothing to do with classified documents.

The picture shows a smiling Trump posing next to several stacks of paper. One high series of piles is marked “Today” while the other, much shorter stack is marked “1960”. The caption claims that Trump is getting ready to declassify all documents in the “Today” bars.

“Files that will be declassified and revealed to the world,” the caption says, claiming that Trump plans to reveal state secrets before leaving the Oval Office.

We ran this photo through a reverse image search on Google (take a look here to find out how), which pulled up images of the same scene that were published by different media. Turns out the photo is not recent: it was taken at the White House on December 14, 2017 during a press event.

The paper stacks are not declassified by Trump. In fact, they are meant to represent rules. That day, Trump’s team set up this exhibition to show what they saw as the need to simplify – and in some cases discard – these laws.

“We have decades of surplus rules to remove,” Trump said during the event.

In the Washington Post video below, the president says he will make the “Today” pile even smaller than the “1960” pile at the end of his time in office. He then cuts a red ribbon stretched over the two piles.

The piles of paper are intended to represent the number of pages of regulations in 1960 and 2017, respectively. Trump said at the event that there were 20,000 pages of regulation in 1960 and 185,000 pages in 2017. However, the Washington Post was skeptical and decided that the bars at the event were too high and must have contained many more papers than these numbers. .