Home World One day after the fatal church attack in Nice, here is what...
Facebook
Twitter
WhatsApp
Linkedin
LINE 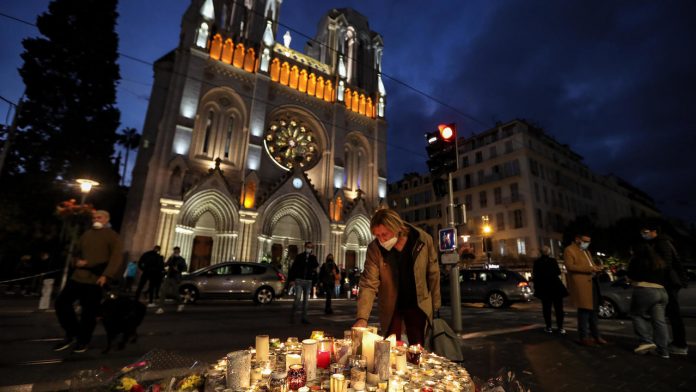 A knife attacker who killed three people, cut the neck of two inside a church in Nice on the French Riviera on Thursday, is a young Tunisian wanderer from Sfax who first arrived in Europe last month, according to French prosecutors.

The killings came two weeks after a French teacher was beheaded outside his school north of Paris by a suspected Islamist extremist. The teacher had shown his students cartoons of the Prophet Muhammad during a lesson on free speech. Here’s what we know so far.

Kl. 08.29 French time (0729 GMT) a man with a knife started attacking people praying in the Basilica Notre-Dame in the heart of the Mediterranean city.

The attacker had a copy of the Koran, three knives and two mobile phones with him, France’s anti-terrorism prosecutor Jean-Francois Ricard told a press conference.

In a nearly half-hour frenzy, the assailant used a 19-centimeter (7-inch) knife to cut the neck of a 60-year-old woman who died inside the church.

The body of a man, a 55-year-old church employee, was found nearby inside the basilica – his neck had also been split.

>> Why has Nice become a target of terrorism in France?

Another woman, a 44-year-old who had fled the church at 8:54 to a nearby restaurant, died shortly after multiple stab wounds.

The killer was shot and wounded by police, who quickly arrived at the scene.

Videos seen by AFP show he was hit at least six times.

Ricard said police fired after the man threatened them.

Even when he was arrested, the man continued to shout “Allahu Akbar” (God is greatest) before being rushed to the city’s Pasteur hospital. Ricard described his condition overnight as life-threatening.

Who is the suspect?

The 21-year-old Tunisian suspect first arrived in France earlier this month after arriving secretly in Europe on a wandering boat via the Italian island of Lampedusa on September 20, according to Ricard.

The prosecutor added that he had then arrived at the southern Italian port of Bari on 9 October.

An Italian Interior Ministry source told AFP he had received an order to leave Italy within a week of arriving in Lampedusa.

The suspected knife man called himself “Brahim” after his arrest. Tunisian legal sources said an investigation had been launched, adding that he had a criminal record for violent behavior and drug trafficking.

In an interview with AFP, his brother said he had left Tunisia about six weeks ago and had arrived late on Wednesday in France. “He said he had traveled to France when work was better,” the brother explained, adding that he had spoken to his siblings on Wednesday night.

French Interior Minister Gerald Darmanin told the television station on Friday that the French intelligence service had nothing to say about the attacker.

The assailant comes from a large family of seemingly modest means living in the central town of Sfax. His mother said he repaired motorcycles and described how he had taken to prayer the last two and a half years. “He did not go out and communicate with others,” she told AFP.

Who were the victims?

The dead man was a 45-year-old father of two girls who served as the sacristy of the basilica and cared for the church, according to Canon Philippe Asso, its most senior pastor.

The first victim of the killers was a 60-year-old woman he was trying to decapitate, and the other woman who died was a mother of three aged 44.

“Tell my kids I love them,” she managed to say before her death, according to French cable channel BFM TV.

The Brazilian government later said she was a Brazilian national resident in France, although it did not confirm whether she also had French nationality.

The French authorities treat the case as a terrorist attack, with the anti-terror prosecutor immediately launching an investigation into “murders and attempted murders linked to a terrorist company”. President Emmanuel Macron called it an “Islamist terrorist attack.”

Late Thursday, a 47-year-old man was taken into custody on suspicion of having been in contact with the attacker before the attack, a court source said Friday, adding that the nature of that contact has not been determined.