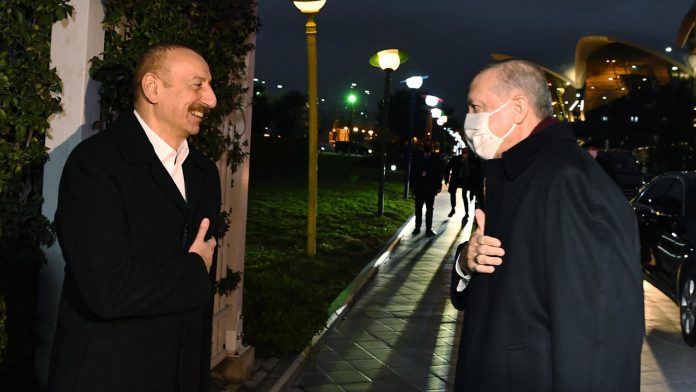 During a visit to Azerbaijan on Thursday to celebrate his close ally’s recent victory in the Nagorno-Karabakh conflict, Turkish President Recep Tayyip Erdogan said Baku’s “fight” against Yerevan was not over and promised to continue the race “on many other fronts”.

“Azerbaijan’s rescue of land from occupation does not mean that the fight is over,” Erdogan said during a military parade in Baku.

“The struggle in the political and military spheres will continue from now on on many other fronts.”

Erdogan’s visit came weeks after Armenia and Azerbaijan reached an agreement with Russia to end clashes over Nagorno-Karabakh following a series of Azerbaijani victories in their struggle to retake the disputed region.

Azerbaijan’s historic victory was an important geopolitical coup for Erdogan, who has cemented Turkey’s leading role as a trader in the former Soviet Caucasus region.

Turkey supported Azerbaijan during the six-week fighting that erupted in late September, killing more than 5,000 people. Ankara was widely accused of sending mercenaries from Syria to strengthen Baku’s army, but has repeatedly denied the allegations.

“Without Erdogan’s support, Yerevan’s ally Russia – which is competing with Ankara for influence in the Caucasus – would have pressured Baku to stop fighting.”

The ceasefire encouraged mass celebrations in Azerbaijan. But when thousands of Armenian residents in the region fled the territory, the outcry was met with rage in Armenia, where Prime Minister Nikol Pashinyan has met with large demonstrations demanding his resignation.

The agreement led Armenia to relinquish control of parts of the enclave it had lost during recent fighting and seven adjoining districts it had seized during a war in the 1990s.

But the agreement leaves Nagorno-Karabakh’s political status in limbo.

The enclave will see its future guaranteed by almost 2,000 Russian peacekeepers deployed for a renewable five-year mandate and the ceasefire will be monitored in Azerbaijan by the Turkish military.

Separatists in Nagorno-Karabakh broke away from Baku in a war in the early 1990s that left some 30,000 people dead and displaced tens of thousands of Azerbaijanis.

But their claim to autonomy has not been recognized internationally, not even by Armenia.

Historical tensions from the Ottoman to Soviet eras

Armenia accused Turkey of directly interfering in recent fighting – including sending foreign fighters to the battlefield – accusations that both Baku and Ankara dismissed.

Their common border has been closed since 1993 when the two countries cut diplomatic ties.

Erdogan dismissed international reconciliation efforts with Armenia in 2009, saying ties could only be restored after Armenian forces withdrew from Nagorno-Karabakh.

The two countries share a deep and mutual distrust of Armenia’s efforts to recognize as genocide massacres from World War I of about 1.5 million Armenians in the Ottoman Empire.

Called “one nation, two states”, Turkey’s alliance with Turkish – speaking Azerbaijan was created after the collapse of the Soviet Union in 1991 and has deepened during Erdogan’s time.

Turkey has helped Azerbaijan train and arm its military and serves as the main route for energy exports to Europe, past Russia.