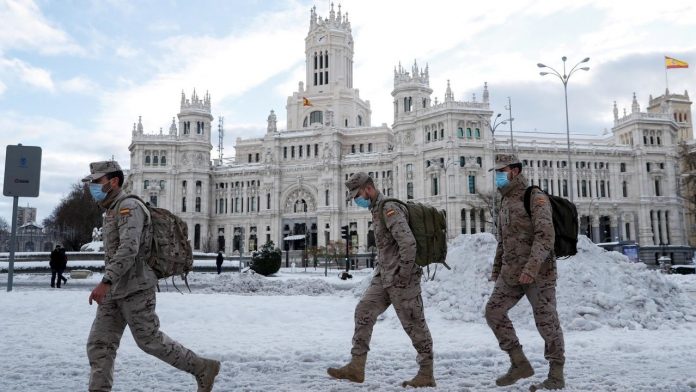 The Spanish government will send convoys carrying the Covid-19 vaccine and food supply on Sunday to areas cut off by Storm Filomena, which carried the heaviest snowfall in decades across central Spain and killed four people.

In the Madrid area, rescuers reached 1,500 people trapped in cars, while police broke out a major snowball fight after authorities appealed to citizens to stay home for the risk of accidents or the spread of coronavirus.

Forecasts warned of dangerous conditions in the next few days, with temperatures expected to drop to -10 ° C (14F) next week and the prospect of snow turning to ice and damaged trees falling.

In Madrid, police shielded buildings with heavy snow loads on the roofs in case of accidents, but residents flocked to enjoy the rare sight of their city covered in white.

About 100 workers and shoppers have spent two nights in a shopping mall in Majahaonda, a city north of Madrid, after being caught by the blizzard on Friday.

“There are people sleeping on the ground in cardboard,” Ivan Alcala, a restaurant worker, told TVE-TV.

People go through heavy snow in # Madrid on January 9, a day after snowstorms caused chaos over large parts of Spain. The snow blocked roads, especially in the middle of the country, where Madrid saw its heaviest snowfall since 1971

The authorities in the capital have closed the city’s schools, colleges and universities until at least Wednesday.

About 20,000 km of roads across central Spain were affected by the storm and the government would send convoys transporting the vaccine and food supplies to those in need, said Transport Minister Jose Luis Abalos on Saturday.

In addition to the Madrid region, exceptional conditions hit hard in four other regions – Aragon, Valencia, Castilla-La Mancha and Catalonia.

A man and a woman in a car drowned after a river burst near Malaga in the south, while two homeless people froze to death in Madrid and Calatayud in the east, officials said.

The Swedish Meteorological Agency (Aemet) said that up to 20-30 cm of snow fell in Madrid on Saturday, most since 1971.