Home World Police are accused of hypocrisy after the Trump mob storms the US...
Facebook
Twitter
WhatsApp
Linkedin
LINE 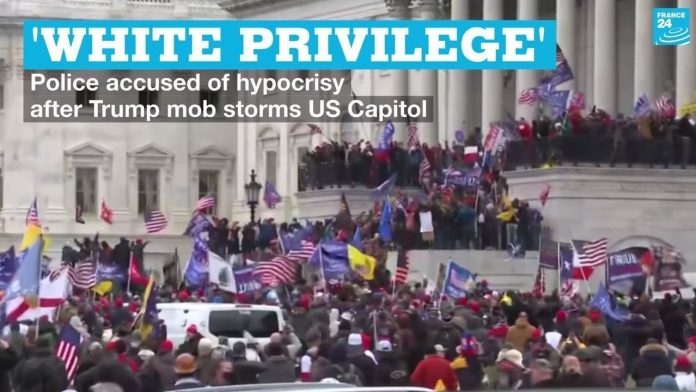 Images of a mob of Donald Trump supporters streaming past overwhelmed police to storm the US capital have shocked the world. Many have also asked why they presented such a stark contrast to the heavy police presence and violent tactics used when protesters from Black Lives Matter took to the streets of Washington DC last year.

“This is a total shame. During the summer, we saw federal law enforcement use tear gas, bangs and rubber bullets on Black Lives Matter protesters without provocation. Where are the riot groups now? Are they down when white supremacists try to coup?” Asked DC councilor Janeese Lewis George on Twitter.

“Let’s face the truth: If not for #whiteprivilege, the armed pro-Trump rebels today would have endured the same police brutality that peaceful Black Lives Matter protesters faced this spring,” the Human Rights Campaign tweeted.

In June last year, peaceful protesters protesting after George Floyd’s death were removed with tear gas and rubber bullets so that Donald Trump could pose for a photo in front of a church, while the National Guard was called in to protect the capital’s monuments.

On Wednesday, surveillance of the US capital was handed over to the Capitol Police, which covers about 2,000.

It took about two hours before reinforcements arrived and restored order and only 52 of the rioters have been arrested so far, while one person was shot dead by police.

“When black people protest for our lives, we are all too often met by National Guard troops or police officers equipped with protective rifles, shields, tear gas and combat helmets. Make no mistake, if the protesters were black we would have been tear gas, beaten and perhaps shot.”