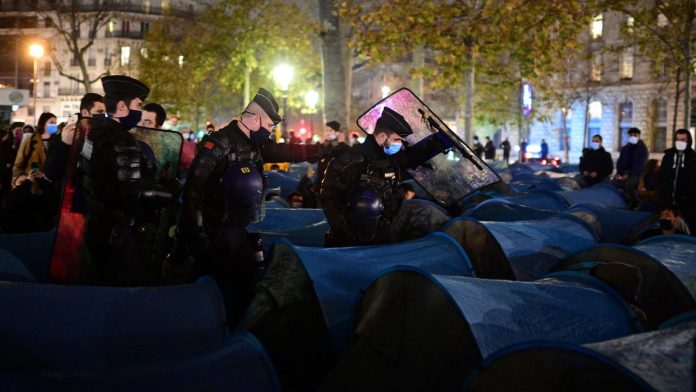 Police used tear gas when dismantling a new migration camp in central Paris set up to house hundreds of refugees evacuated from makeshift suburban shelters without being relocated.

Volunteers had helped set up about 500 blue tents on Place de la Republique in the heart of the French capital late Monday, which was quickly filled with migrants, the majority from Afghanistan.

About an hour later, police arrived to dismantle the camp and set up tents, sometimes with people still inside, to protest from migrants and mock volunteers.

“They are too violent,” sobbed Shahbuddin, a 34-year-old Afghan, as he put a gray hat back on his head after being forced out of the tent.

Police later used tear gas to disperse the rest of the camp and took the migrants to the streets of central Paris.

The dismantling of the new camp comes a week after migrants were evacuated from temporary shelters in the northern suburb of Saint-Denis without being relocated.

Ian Brossart, a deputy mayor of the city in charge of housing, emergency housing and refugee protection, threw “law and order’s response to a social situation”.

French Interior Minister Gerald Darmanin later said the images of the dismantling were “shocking” and that he had ordered city police to submit a report on the approval.

Paris is an important stop on the European migration route, with tent camps repeatedly growing up around the city to be demolished by the police a few months later.

Thousands have traveled from Paris to the port of Calais, trying to stow away trucks on their way across the Channel to England. A small number try to cross by boat.

The permit comes after the French government approved an amended security law that would restrict the publication of photos or videos taken of police officers’ faces while performing their duties in public places.

The media association says that this can give the police the green light to prevent journalists from doing their job and possibly document abuses by security forces.

“We are here to show that we have nowhere else to go,” said Murtaza, 20, from Afghanistan before the camp spread.

“We can not live like animals, we just want to apply for asylum.”