Home World Pompeo arrives in France at the beginning of a difficult tour in...
Facebook
Twitter
WhatsApp
Linkedin
LINE 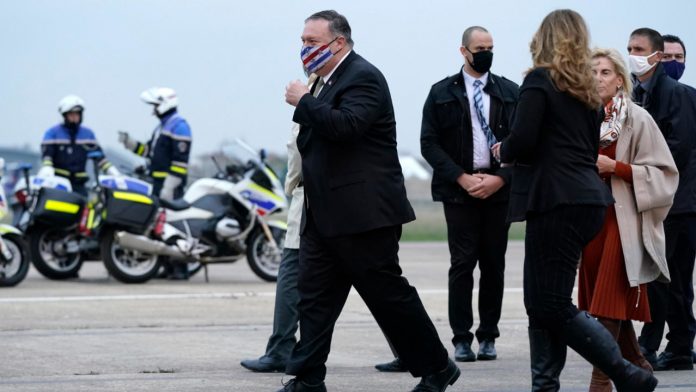 US Secretary of State Mike Pompeo arrived in France on Saturday at the start of a seven-nation tour of Europe and the Middle East, a trip that is sure to be difficult as all countries on his schedule have congratulated Joe Biden on his victory in the US presidential race while the top US diplomat has not accepted the results of the vote.

In an arrival tweet published on Saturday, Pompeo emphasized the “shared values: democracy, freedom and the rule of law” between the United States and France. “The strong relationship between our countries cannot be overestimated, and I look forward to my discussions here in Paris,” he said.

Good to be in France, America’s oldest friend and Ally. Our partnership is based on our common values: democracy, freedom and the rule of law. The strong relationship between our countries cannot be overestimated, and I look forward to my discussions here in Paris. pic.twitter.com/NMPa0aX7V0

Pompeo’s trip aims to strengthen the priorities of President Donald Trump’s outgoing administration, in particular its anti – China and Iran policies. It will include visits to Israeli settlements in the West Bank, avoided by former Secretary of State.

But the common US foreign policy issues are likely to be overshadowed by an extraordinary moment in global politics: While most of the world has accepted the results of the November 3 presidential election, the top US diplomat – like the US president and much of his Republican party – has not.

Pompeo raised his eyebrows last week when, in response to a reporter’s question about the transition process, the top US diplomat replied: “There will be a smooth transition to a second Trump administration.” A few days later, Pompeo softened his remarks, noting that the State Department would be functional and successful with the president taking office on January 20, 2021.

France, along with Germany, Britain and other European countries, congratulated Biden last weekend and French President Emmanuel Macron on Tuesday held his first telephone conversation with the US President-elect.

Pompeo will meet with Macron on Monday in a meeting that will be held “in complete openness to the team of President-elect Joe Biden,” Macron’s office said on Friday.

Tense relationship despite a first visit

French Foreign Minister Jean-Yves Le Drian on Friday said there were “difficult issues” on the table, from the situation in Iraq and Iran, terrorism, the Middle East and China.

In response to a question about Trump’s reported plans to hasten a US withdrawal from Afghanistan during a television interview, Le Drian noted that “We do not think it should happen. We will also say that it should not happen in Iraq either.”

For the past four years, Macron has had a tense relationship with Trump despite initial attempts to wake each other up with gestures of extravagance.

Shortly after Trump took office, Macron made the President of the United States a guest of honor at a military parade in the Bastille. But Trump later withdrew from Paris’ global climate agreement, a blow to Macron.

The United States also left the hard-won nuclear deal in Iran, and Pompeo said in a tweet before departing on his trip that “Iran’s destabilizing behavior” would be among the topics of discussion.

Promoting religious freedom and counter-terrorism were also among the topics on the table during his trip.

Both issues are very relevant for France. There have been three terrorist attacks in recent weeks in France that have killed four people, linked to recently published caricatures of the Prophet of Islam. Anti-France protests rolled through some Muslim countries after Macron insisted on his nation’s respect for freedom of expression, including the right to draw caricatures.

After France, Pompeo’s tour takes him to Turkey, Georgia, Israel, the United Arab Emirates, Qatar and Saudi Arabia. The leaders of all these countries have publicly congratulated Biden.

Turkey, Georgia and Qatar have had brutal relations with the Trump administration, and it was not clear whether Pompeo planned public relations with his leaders – or whether he would take questions from the press, with whom he has had a frosty relationship.

The administration’s relations with Turkey have been particularly strained following NATO allies’ purchase of a Russian missile defense system, and Pompeo’s stop in Istanbul next week will not include meetings with Turkish officials. Instead, Pompeo will meet with religious leaders to highlight his promotion of religious freedom.

Palestinian officials, who have been snubbed by the Trump administration, have condemned Pompeo’s plans to visit the West Bank settlement of Psagot. Palestinian Prime Minister Mohammad Shtayyeh tweeted on Friday that this was a “dangerous precedent” that legalizes settlements.

We apologize for the US sec. of Mike Pompeo’s intention to visit the illegal settlement of Psagot, built on land owned by Palestinian owners in the city of Al-Bireh, during his visit to Israel next week. This dangerous precedent legalizes settlements and a blow to all legitimacy / UN travel.

In line with Trump’s refusal to allow and orders to cabinet agencies not to cooperate with the Biden transition team, the State Department has not been involved in facilitating Biden’s talks with foreign leaders, according to officials familiar with the process.

At a press conference on Tuesday, Pompeo said he would continue as if there was no change.

Nevertheless, his French counterpart Le Drian has looked to the future and said last Sunday in Cairo that “we will work with the new President of the United States and his team in the context of new transatlantic relations, we will need to find this. ”