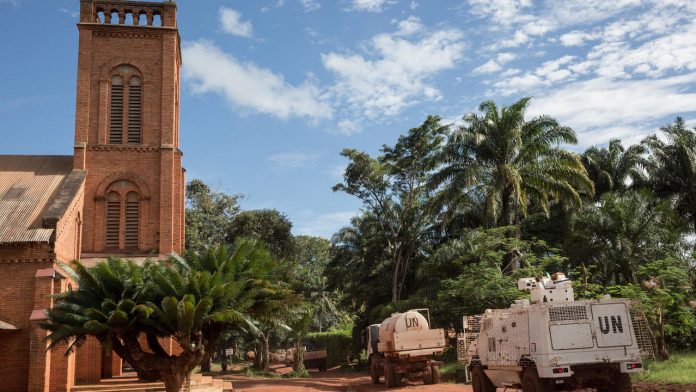 Rebel fighters captured the southern diamond mining town of Bangassou in the Central African Republic on Sunday, weeks after they were accused of a coup attempt and before partial results from a tense presidential election.

At least five rebels have been killed and two soldiers wounded in clashes in the central African city of Bangassou, located on the southern border of the Democratic Republic of Congo, the UN peacekeeping mission MINUSCA said in a statement.

Rebels, who the government and the UN say are backed by former President François Bozizé, launched an offensive last month after the Constitutional Court rejected Bozizé’s candidacy to challenge President Faustin-Archange Touadera in last Sunday’s vote.

Bozizé’s party officially denies working with the rebels, but some in the party have suggested working together.

The coalition of armed rebel groups, which control two-thirds of the coup-prone country, launched an offensive on December 19 with the aim of disrupting last weekend’s elections and “marching on Bangui”.

They have so far been kept out of the capital by federal soldiers, UN peacekeepers and reinforcements sent from Russia and Rwanda.

But rebels attacked Bangassou, about 750 km (470 miles) from Bangui, at dawn on Saturday.

Government troops had “abandoned their position and are at our base,” he added.

Médecins Sans Frontières (MSF) said they had transported 15 wounded in the fighting.

Bangassou resident Ismail said Sunday’s attack was expected locally for about two weeks, and many had fled across the border into DR Congo.

“My children left, I stayed with my wife,” Ismail told AFP when shots could be heard by telephone.

Bangassou has previously been the target of brutal assaults.

Roland Marchal, a specialist in the Central African Republic at the French University of Science Po, said “the rebels thought they could reach Bangui, but they did not expect the Russians and Rwandans to come”.

The locked country is one of the poorest in the world and among the most volatile, suffering coups and wars since independence from France in 1960.

In 2013, bloodshed erupted once again when then-President Bozizé, who himself had taken power in a coup a decade earlier, was ousted by a predominantly Muslim coalition called Seleka.

Speaking at the turn of the year on December 31, Touadera said his country was “at war” and that its “survival was threatened. We will win this asymmetric war,” he added.

The capture of Bangassou comes before the part that is published in part for the presidential election.

Lack of security meant that voting did not take place in 29 of the country’s 71 sub-prefectures, while thousands were prevented from voting or never received their ballot papers.

The Touadera party claimed victory, while a coalition of opposition groups demanded that the election be annulled, claiming that voting and stopping elections.

“Bizarrely, they say nothing about former President François Bozizé, an ally of the armed groups responsible for the violence in question,” he tweeted.

On Sunday, the UN mission said in a statement that the main armed groups “UPC, MPC, 3R, FPRC, anti-balakas and former President Bozizé are responsible for these attacks and the serious consequences for the civilian population”.

The final results of the first round are not expected before January 18, and if there is no immediate winner, a run-off will be held on February 14.