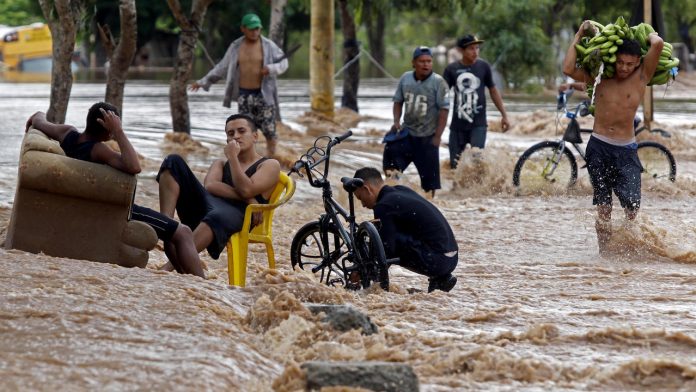 Rescue workers dug through piles of thick mud Thursday in the grim search for bodies as Central American countries began counting the cost of Hurricane Iota, which left at least 44 dead in a wave of destruction.

Initial estimates from the United Nations Children’s Fund, UNICEF, amounted to 4.6 million people affected by the hurricane in the poor region, including 1.8 million children.

Among the worst-hit areas was the Penas de Blanca Mountains in the Matagalpa branch in northern Nicaragua, where rescue workers dug desperately through mud in search of more victims on Thursday.

A landslide on Tuesday claimed the lives of nine people, including six children, but more are missing.

“I came here and found my daughter dead … she was my only child, I prayed to God for a girl and see how it ended,” said an upset Orlando Navarrete, father of one of the children.

It is said that 250 municipal brigades had been sent out to collect fallen trees and debris from the hurricane.

The giant storm, which gradually eased as it moved inland, destroyed much of the area that Hurricane Eta spared a few weeks ago.

The US National Hurricane Center warned that saturated soils from heavy rainfall and floods could exacerbate the risk of potentially catastrophic mudslides across parts of Honduras, Nicaragua and Guatemala.

In Honduras, where at least 14 people died in landslides in the western part of Lempira, civil protection authorities said they were looking for more bodies on Thursday.

Much of the country’s industrial heartland in the northern Sula Valley was underwater, as it was two weeks ago after Hurricane Eta. However, water that had covered houses around San Pedro Sula Airport had begun to decline.

The whole area had turned into a huge lagoon after heavy rains caused the mighty rivers Ulua and Chamelecon to overflow.

Guatemalan President Alejandro Giammattei held a disaster meeting to assess the situation in the country, where bridges and roads were destroyed and homes swept away by floodwaters.

Two people were killed and another five were missing, authorities said. More than 4,000 people had been taken to shelters.

Central American governments this week called for international support to deal with the devastation of the hurricanes.

The European Union said it would allocate more than $ 10 million in emergency funds to Nicaragua.

The US Bureau of International Cooperation said it would provide $ 17 million in aid.

UNICEF appealed for more than $ 42 million to cover the region’s humanitarian needs.

The Atlantic has seen a record-breaking season this year with 30 named storms and 13 hurricanes.