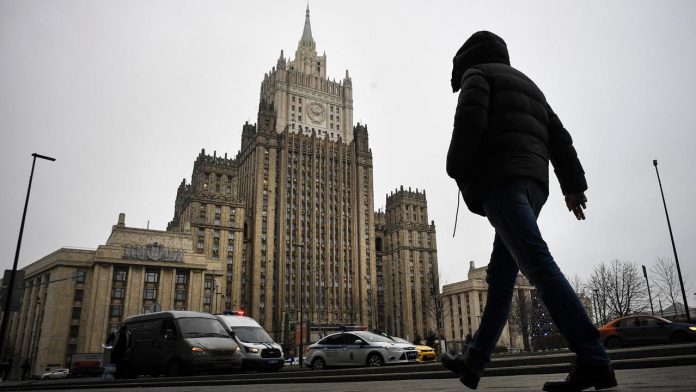 Moscow is expanding the list of European officials banned from entering Russia in response to European Union sanctions over the poisoning of Russian opposition leader Alexei Navalny, Russia’s foreign ministry said on Tuesday.

The move comes a day after Navalny, a longtime opponent of President Vladimir Putin, released a recording of a phone call he said he made to an alleged state security operator – who was identified by the media as a member of a team that has reportedly followed politicians in years. In the recording, the man stated that he was involved in concealing the alleged poisoning and revealed some details about the alleged operation.

In October, the EU imposed sanctions on six Russian officials and a state research institute over what the German authorities said was a poisoning in Russia with a nerve agent.

In a statement on Tuesday, Russia’s foreign ministry called the sanctions “a confrontational political decision” and announced that it was expanding “the list of representatives of EU member states and institutions that will be denied entry into the Russian Federation.”

The ministry did not reveal the names of EU officials or the exact number to be expelled from Russia. But it said the list includes “those responsible for promoting anti-Russian sanctions initiatives” in the 27-member bloc.

Navalny fell ill during an August 20 flight in Russia and was flown to Berlin while still in a coma for treatment two days later. Labs in Germany, France and Sweden, and tests by the Organization for the Prohibition of Chemical Weapons, showed that he was exposed to a nerve agent from Novichok from the Soviet era.

The diplomatic missions of the three countries, as well as the EU delegation to Russia, have been informed of the measures taken in response to EU sanctions, the ministry said.

According to the German Foreign Ministry, the German Chargée d’affaires in Moscow was informed that Russia had issued an entry ban on “German government bodies” but no further details were given.

The ministry said the pattern of Russian retaliation was known, but it still considered them “unjustified.” It reiterated the German position that the Navalny case is not a bilateral issue but has broader international imports due to the use of a chemical agent. It renewed calls on Russia to clean up what happened and said Moscow had so far shown no readiness to do so.

Last week, a joint investigation by the research group Bellingcat and several media outlets claimed that agents from Russia’s FSB Homeland Security Agency followed Navalny during his travels since 2017. The survey says the operators have “specialized training in chemical weapons, chemistry and medicine,” and some of them were ” near “by Navalny within the time frame” during which he was poisoned. ”

Navalny, who is currently being re-established in Germany, said the report undoubtedly showed that FSB agents were trying to kill him on Putin’s orders. The video of his phone call to one of the alleged operators, dismissed by the FSB as a fake, received nearly 13 million views on YouTube 22 hours after it was published.

Russian authorities have repeatedly denied any involvement. Putin accused last week that the investigation was based on information from US spy agencies and denied the allegations.

Kremlin spokesman Dmitry Peskov on Tuesday said that “neither the Kremlin nor anyone can definitively talk about any form of poisoning”, as Russia has not received any “information” about this from the three countries or the OPCW.