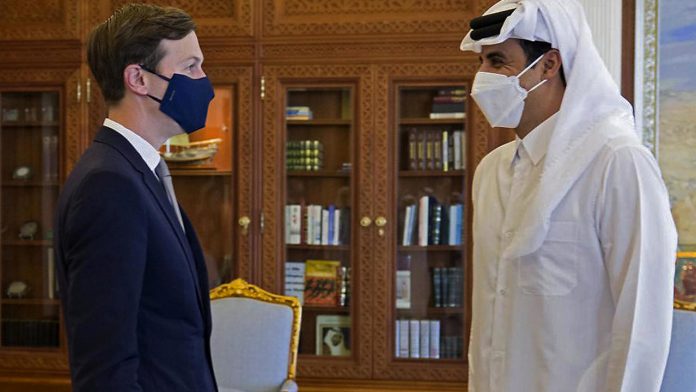 Saudi Arabia’s foreign minister said on Friday that a resolution to a bitter dispute with Qatar seemed “within reach” after Kuwait announced progress toward ending a line that Washington says is blocking a united Gulf front against Iran.

The United States and Kuwait have been working to end the dispute, during which Saudi Arabia, the United Arab Emirates, Bahrain and Egypt have imposed a diplomatic, trade and travel embargo on Qatar since mid-2017.

US President Donald Trump’s senior adviser Jared Kushner had held talks in Doha on Wednesday after a visit to Saudi Arabia.

“We have made significant progress in recent days thanks to Kuwait’s continued efforts but also thanks to strong support from President Trump,” Saudi Foreign Minister Prince Faisal bin Farhan Al Saud said at a video conference in Rome.

“We hope that this progress can lead to a final agreement that is within reach and I can say that I am a little optimistic that we are close to concluding an agreement between all nations in the dispute.”

A source in Washington who was familiar with the discussions said that a preliminary agreement had been reached by the parties and that it could be signed in a few weeks.

“They are working to take what is an agreement in principle and get it actually signed,” the source told Reuters on condition of anonymity.

It quoted him as saying “this agreement has shown that all stakeholders are committed to maintaining the Gulf and pan-Arab solidarity, unity and stability.”

US Secretary of State Mike Pompeo spoke at a distance at a summit in Bahrain on Friday, saying the United States was “very hopeful” that the dispute would be resolved.

All countries involved are American allies. Qatar hosts the region’s largest US military base, Bahrain is home to the US Navy’s Fifth Fleet, and Saudi Arabia and the United Arab Emirates host US troops.

Washington has worked to resume the Yellow Room for Qatari aircraft as a first step, say diplomats and sources.

The boycott countries accuse Doha of supporting terrorism. Qatar denies the allegations, saying the embargo is aimed at undermining its sovereignty.

Kuwait’s foreign minister, Sheikh Ahmad Nasser al-Sabah, said earlier on Friday that fruitful discussions had taken place recently “where all sides expressed their openness to the Gulf and Arab unity and stability, and to reach a final agreement realizing lasting solidarity”.

UN Secretary-General Antonio Guterres is encouraged by Kuwait’s statement and hopes that all countries involved will work together to formally resolve their differences, said UN Spokesman Stephane Dujarric.

Iranian Foreign Minister Mohammad Javad Zarif in a Twitter post said he hoped the Gulf Reconciliation “contributes to the stability and political and economic development of all the peoples of our region.”

We welcome understandings in the Persian Gulf announced by Kuwait.

We hope that reconciliation contributes to the stability and political and economic development of all the people of our region. # HOPP

The Qatari minister previously told the Rome Conference that Doha hoped “things will go in the right direction” but that every resolution should be based on mutual respect for sovereignty, including in foreign policy.

Doha had made 13 demands, ranging from shutting down Al Jazeera television and shutting down a Turkish base to cutting links to the Muslim Brotherhood and downgrading ties with Iran, which shares a significant gas field with Qatar.