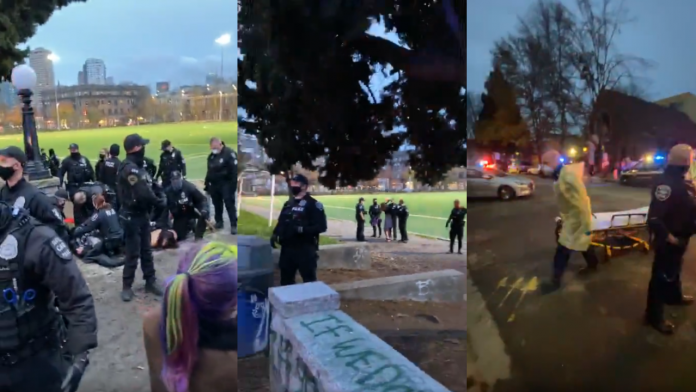 Seattle police on December 20 broke a “black block” -style football match favored by supporters of the Antifa protest movement. After asking them to leave the park – which has been closed since the end of June after Black Lives Matter protests – the police used mace and drove people to the ground and arrested seven. Videos and photos of the event have spread online, with many users claiming that the police targeted this group as protesters and Antifa members, while ignoring others in the park.

Around At 3:30 pm on Sunday, December 20, a group of people gathered in Seattle’s Cal Anderson Park to play what a social media user described as “a cool, socially distant football game.” An hour later, up to 30 police officers had arrived at the scene and one person was taken to hospital in an ambulance.

After an intense and traumatic couple of days, some friends gathered for a chill, socially distant football game at Cal. Many are reluctant to go to Cal while revealing their identity and came in blocks. Shortly after our arrival, 25+ officers arrived and arrested. https://t.co/aqCBGs4Mgh pic.twitter.com/5H6hsVW9kJ

A 40-minute livestream video with the text “Antifa football turns into arrests and brutality” published on Instagram shows the events unfolding. At least twelve police officers are seen approaching the football field and the group of players, who usually wore black clothes. The police tell them that they must leave and that the park is closed.

“You did not do it for all the other football players,” the person who took the video told police. “Why are you all kicking out of the park when the black block has arrived?” The police do not respond and only continue to tell them that the park is closed.

Independent journalist Mike Scaturo arrived at Cal Anderson Park after hearing from a police scanner that officers had been deployed to the park.

It was definitely exciting. These protesters have been marching almost every day since May, so many of these officers know these people by name. But from what I saw on the ground, there was no damage there. People only played football. I saw no one with umbrellas like they normally would [in a protest]. I did not really see anyone wearing a gas mask. A street doctor came and asked me if I had any wet wipes because they had left their medicine bag at home. They literally just went to play football. These people, apart from being dressed in all black, were not equipped with shields or umbrellas or anything like that. They did not expect confrontation.

According to Seattle police, they received a message about “reports of people inside the park” at 4:30 p.m., and responded with several officers. The Instagram video shows that the players, as well as additional police officers, had gathered at the edge of the football field when the confrontation escalated.

14’04 ”in the video we can see the police shoot one of the football players to the ground and place them under arrest. The police then create a barricade around this person and start shooting others out of the park. At 14’47 “they start using nutmeg, then several others are taken to the ground and handcuffed by police who arrest them.

A screenshot from a livestream posted on Instagram on December 20 shows Seattle Police placing several people in custody. © DR

According to reports from the Seattle Police Department, the first individual was placed under assault after allegedly spitting at a police officer. The other six were arrested for “obstructing a police officer” when they allegedly tried to “unarrest” that person.

From the video of the incident, it is not clear what prompted the first arrest.

About 15 minutes after police arrived at Cal Anderson Park, seven people were arrested. The first arrested person (see above) was isolated from others after the arrest. © DR

Spectators said up to 30 police officers were present in the park after reinforcements were called. About ten police vehicles parked outside the park, including an arrest vehicle.

About 15 minutes after the arrests, an ambulance arrived at the scene to respond to an injury to one of the arrested persons who did not respond to the scene. Police say they are investigating how the person was injured.

In a video published on Twitter on December 20, an ambulance can be seen at the end of a street that is partially blocked by five police vehicles.

According to spectators, the ambulance took 15 minutes to arrive after being called, even though the emergency dispatch station was only four blocks away, as police cars blocked the street. There are three hospitals within a five minute drive of the park.

‘Why was this answer even necessary from the beginning?’

Many who posted about the incident on social media claim that the arrests were directed at people who the police knew were protesters, Antifa and activists.

Social media users shared videos of other residents, athletes and dog walkers who were present in the park before and after the arrests, claiming that the police only targeted this particular black-clad group without applying the park closure to others.

In a video posted on Twitter on December 20, a police officer told spectators: “I want to make sure the message is consistent for everyone: the park is closed.”

In a video posted on Twitter on December 20 after the arrest, people can be seen playing football on the same pitch at Cal Anderson Park.

Scaturo noted that some people remained in the park after the arrests.

Twenty minutes later I counted about 20 people going back with their dogs, others playing football, some looking like they were ready to play cricket. It is quite common that there are usually about ten people in the field, who only do ordinary park stuff, almost all hours of the day. All summer, the height of the good weather here, on a Friday night you may have over 100 people there who do sports, eat dinner, picnic, stuff.

People in yoga pants, walking their dogs, playing football, have not bothered for weeks and months. And when these activists, dressed in black, go to play football, drink beer and just have a gathering, you get answers from a couple dozen cops. It is definitely worth noting that when this group was asked to leave the park, they opposed it a bit, but I think the biggest problem is, why was this answer even necessary in the first place?

Cal Anderson Park is located in the Capitol Hill neighborhood of Seattle, the site of ongoing protests, and formerly the site of the Capitol Hill Autonomous Zone, where protesters gathered after police killed George Floyd in May last year. According to the Seattle Parks and Recreation Department, the park has been closed since June 30 “to be restored and repaired for future demonstrations and other park uses.” They also note, “If there are no incidents, SPD [Seattle Police Department] not expected to be at Cal Anderson Park. ”

The application of the park’s closure has been weak and the park department announces that residents may use the park unless park employees are present to make repairs. In fact, the park has been used regularly by Seattle residents since it was closed for leisure and events, including a religious worship concert held in August attended by hundreds, many without masks or social distances.

Cal Anderson Park has also been in the news in recent days as on December 18, Seattle police and city workers cleared a camp of homeless people and arrested 24 in the process.