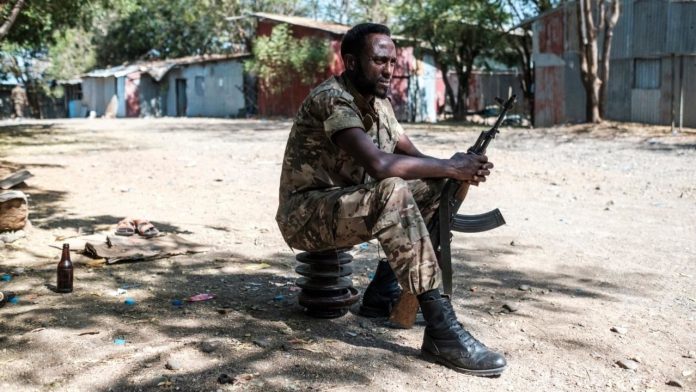 Dozens of people died in a dawn attack on Wednesday of unknown gunmen in Ethiopia’s western region of Benishangul-Gumuz, residents told Reuters, the latest deadly violence in the area.

Gashu Dugaz, a senior security official from the region, said authorities were aware of the attack and verified the details of the attackers ‘and victims’ identities, but did not provide further information.

The Horn of Africa in the African country has been fighting rebel forces in the northern Tigray region for over six weeks in a conflict that has displaced nearly 950,000 people.

Federal troops deployed in other regions of Africa’s second most populous nation were deployed to fight that conflict, raising fears of a security vacuum.

Even before the outbreak of the Tigray War last month, Prime Minister Abiy Ahmed’s government had struggled with growing insecurity in many parts of the country. Violence between groups fighting for land and other resources has forced hundreds of thousands of people to flee their homes since Abiy took office in 2018, according to UN estimates.

82 bodies were counted in a field

Belay Wajera, a farmer in the western city of Bulen, told Reuters he counted 82 dead bodies in a field near his home after Wednesday’s dawn attack. He and his family woke up to the sound of gunshots and ran out of their homes as men shouted “catch them,” he said. His wife and five of his children were shot dead, he was shot in the buttocks while four other children fled and are now missing, he told Reuters by phone late Wednesday.

Another resident of the city, Hassen Yimama, said gunmen stormed the area around 6 a.m. (0300 GMT). He told Reuters he counted 20 bodies in another location. He grabbed his own weapon but the attackers shot him in the stomach.

A local doctor said he and colleagues treated 38 injured people, most of them suffering from gunshot wounds. Patients told him about relatives who were killed with knives and told him that armed men set fire to houses and shot at people trying to escape, he said.

“We were not prepared for this and we have run out of medicine,” a nurse at the same facility told Reuters, adding that a five-year-old child died while being taken to the clinic.

The attack came the day after Prime Minister and Chief of Staff Military Chief Birhanu Jula and other senior federal officials visited the region to call for calm after a number of deadly incidents between rival ethnic groups in recent months. The most recent attack in the area was on November 14, when armed men aimed a bus and killed 34 people.

“The desire of enemies to divide Ethiopia along ethnic and religious lines still exists. This wish will remain unfulfilled, “Abiy tweeted on Tuesday along with photos of his meetings that day in the city of Metekel, near where Wednesday’s attack occurred. He said residents expressed a desire for peace and that the feeling “outweighs any divisive agenda”.

The Prime Minister’s spokeswoman did not immediately respond to a request for comment on Wednesday’s attack.