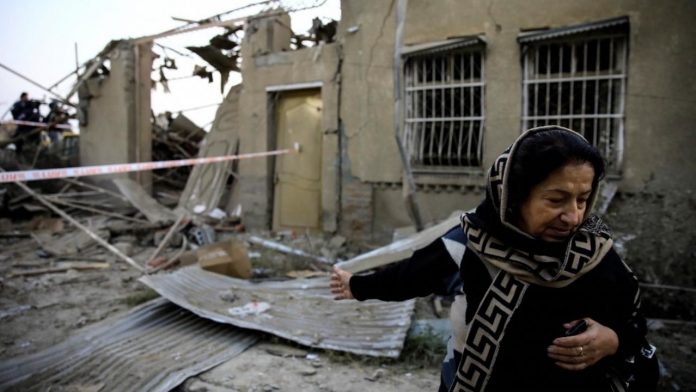 Hopes of ending nearly a month of bloodshed in the mountain enclave of Nagorno-Karabakh looked slim on Thursday as Azerbaijani and ethnic Armenian forces fought new battles ahead of talks in Washington.

Plans for US Secretary of State Mike Pompeo to meet with the foreign ministers of Azerbaijan and Armenia on Friday raised hopes this week that the two former Soviet republics would agree to end their deadly fighting since the mid-1990s.

Russian President Vladimir Putin said he hoped the United States would help Moscow mediate a solution to the conflict.

“I very much hope that our American partners will act together with us and help the settlement,” Putin said at a meeting of the Valdai Discussion Club.

He added that he speaks to leaders in Armenia and Azerbaijan several times a day by telephone.

But those hopes have been dashed by the continuing heavy fighting in and around Nagorno-Karabakh, an outbreak area inside Azerbaijan but controlled by ethnic Armenians, and by angry rhetoric from both sides.

Hundreds of people have been killed since fighting erupted on September 27, fearing a wider war in Turkey and Russia and raising concerns about the safety of Azerbaijan pipelines carrying Azeri gas and oil to world markets.

Putin said on Thursday that Moscow believed nearly 5,000 people had been killed in clashes between Azerbaijan and ethnic Armenian forces, with more than 2,000 dead on each side.

Nagorno-Karabakh said 874 of its military personnel had been killed since September 27, in addition to 37 civilians. Azerbaijan says 63 Azeri civilians have been killed and 293 wounded, but have not revealed its military losses.

Armenian Prime Minister Nikol Pashinyan said on Wednesday that at present he could not see any diplomatic solution to the protracted conflict.

In a transcript of comments to the Nikkei newspaper published on Thursday, Azeri President Ilham Aliyev said the prospects of reaching a peace talks were “very distant”.

As a reiteration of Azerbaijan’s main condition for ending the fighting, Aliyev demanded promises that his country would regain control of Nagorno-Karabakh, which broke out when the Soviet Union collapsed.

“So our main goal in these discussions will be to find out whether the Armenian leadership is ready to liberate our territories or not, and if ready, when?” he said.

Armenians consider Nagorno-Karabakh as part of their historic homeland and accuse Azerbaijan of making a land grab in recent fighting.

Aliyev said he would not rule out “cultural autonomy” for ethnic Armenians in Nagorno-Karabakh, but did not say what he meant by that.

Russia has brokered two ceasefires since September 27, but none of them have held.

Azerbaijan reported fighting in several areas on Thursday, including territories near the contact line that divides the sides.

It also said Armenia had fired three ballistic missiles at three regions inside Azerbaijan, but Armenia denied this.

Armenia reported fighting in several areas, and Nagorno-Karabakh officials said the town of Martuni and nearby villages in enclaves had been shelled.

Azerbaijani forces, backed by weapons purchased from Turkey, say they have gained territorial gains in the recent battle, including full control of the border with Iran, although Nagorno-Karabakh says its forces have repeatedly repulsed attacks.

Turkey has said it would send troops and provide military support to Azerbaijan if such a request was made by its allies.

Putin said Russia disagreed with Turkey on Nagorno-Karabakh, but both countries had to find a compromise. Turkish President Recep Tayyip Erdogan “may seem harsh, but is a flexible politician and reliable partner for Russia,” he said.

Pompeo said Wednesday that he still hopes a diplomatic solution can be found when the United States, France and Russia continue mediation efforts that they have led for decades.

He said that “the right way forward is to stop the conflict, tell them to escalate, that every country must stay out”.