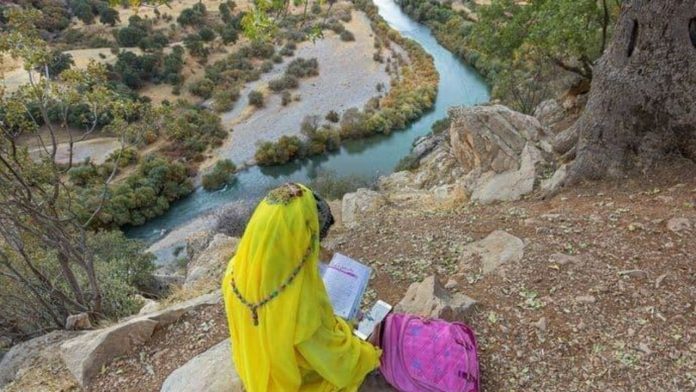 Some Iranian children have more difficulty than virtual school. Photos have recently surfaced on social media of rural children literally having to climb a mountain every day to find a strong enough internet connection to participate in their online classes. People have been particularly shocked by the image of a child who fell and was injured on his dangerous walk to access the internet. We talked to a teacher who feels completely helpless in the face of the situation.

Iran has one of the highest Covid-19 prices in the Middle East, with more than 43,000 officially registered deaths. But even officials at the Ministry of Health acknowledge that the actual number of deaths is likely to be three or four times that number.

Most schools in Iran have been closed, with the exception of a few schools in rural areas. The Iranian government wants all students to stay home and participate in online courses with an application called Shad, which was developed by the Ministry of Education. To participate in distance education, however, children need a strong internet connection or at least a mobile phone.

Although the number of Iranians with access to the Internet has increased dramatically over the past ten years, the digital divide is still a real issue. Many students living in rural areas face serious connection problems, unlike those in large cities where mobile networks are available.

Is it fair that these children have to give up their studies and [the chance to go to] university? “asks the person who filmed this video in Golzamin, a village in central Iran.

However, some rural children have shown incredible determination to attend their online lessons. Some walk for miles and climb to the top of nearby hills or mountains to take advantage of 3G networks, despite how dangerous the journey can be.

Several teachers and activists have commented on the situation, publishing photos and videos of children walking over the mountains, mobile phones in hand and desperately trying to find an internet connection solid enough for them to participate in their lessons via the Shad application.

This photo was taken in Avaj in central Iran. © Observers

One photo in particular underlines how awful this situation is for many children. On November 7, a photo of a young boy with blood all over his face was published online, shocking viewers of Iran. The young man fell badly on a mountain near Rumoshtik, a city in eastern Iran, when he tried to join the application so that he could participate in online courses.

This photo shows the boy who took a bad case near Rumotshik. It was published online on November 7. © Observers “Politicians sitting in air-conditioned offices with a strong 4G connection are the ones overseeing distance education plans.”

Hermidas (not his real name) is a teacher working in a rural area in northeastern Iran. He previously taught in a class of about 20 students. For the past two months, however, he has had to teach with a smartphone and internet. Distance education has been very challenging for many of his students:

We have been doing online courses since September 22, when the autumn semester began. We immediately realized that less than half of the children had a smartphone and no one had access to an internet connection at home. After a few days and talking to many parents, we realized that there were places high up in the nearby mountains where you could access the internet. Since then, the children from the village have walked 45 minutes to reach that place every day. And right now it’s especially cold.

A child from Dolbi, a village in southeastern Iran, climbs a mountain to get a sufficiently stable internet connection for children to access their online lessons. © Observers

Another problem is that these children do not have their own mobile phones, so they have to borrow a phone from a family member who sometimes needs it. So sometimes they can only have it for a few hours before they have to give it up.

Morally, it feels like I’m stuck in a dead end. How can I ask these children to climb a mountain? If an accident occurs, I will feel responsible. Thankfully, nothing has happened to some of the children in my class at the moment, but I am afraid that in the coming weeks with snow and cold it will be almost impossible to hold a lesson.

“Some of the young girls, who were brilliant students, no longer take my lessons”

Another consequence of this situation is that young girls who were brilliant students no longer take my lessons. I lost all my female students because their parents do not want them to climb the mountain [Editor’s note: The region is extremely conservative and most young girls need their parents’ permission to go anywhere].

As for the boys, there are about four or five who only participate intermittently and I have to catch them in the lessons. I know that some of them borrow a neighbor phone to be able to attend the lesson. The children try to share information with each other. Other times I have called to check in on students I have not seen in a long time but often I struggle to reach them.

This student built a small hut in the mountains of the province of Sistan-and-Baluchestan, where he can get internet and participate in online courses. This photo was posted on Twitter on November 14th. © Observers

I went to school once to give students a lesson in person. Some of the children had no idea what I was talking about because they had not been able to participate in the virtual lessons. Yet they are usually full of energy and curiosity and eager to learn. One of my colleagues in the region was able to continue giving personal lessons [Editor’s note: The Iranian government has made exceptions for small villages without internet access and for teachers who live near the schools where they teach]. However, I do not live in the region where I teach so I have to do it practically now.

Politicians who sit in air-conditioned offices with a strong 4G connection are the ones who monitor the plans for distance education. They do not know what it’s like outside their ivory tower. They are not interested in how things are for village children. They launched this online learning system months ago. They could have come up with a solution to provide emergency access to the internet or provide cell phones to children from poor families. They could have done internet for free in these areas, but they did nothing.

Several media outlets, including the BBC Persian service, have reported that at least eight children living in rural areas who were unable to attend online lessons have committed suicide in recent weeks. Our observer says that he is unfortunately not surprised by this frightening statistic:

We have not had any cases in my class but I understand the danger. These children believe that the only way for them to escape poverty is to go to school. Right now, for example, it is their poverty that is preventing them from going to virtual school, learning and having the chance to rise up the social ladder. This situation reinforces existing inequalities and is fed into the shame they feel they are not on the same level with their classmates.

We must never forget how important the idea of ​​studying is for our culture and what a strong force social pressure is in Iran. Every year, there are cases where students commit suicide after receiving poor grades.

The Iranian government, for its part, denies that all children have committed suicide because they cannot go online to school. They also say they have not reported any cases of children being injured while climbing mountains.