Home World Some signs of agreement when the talks after Brexit reach their last...
Facebook
Twitter
WhatsApp
Linkedin
LINE 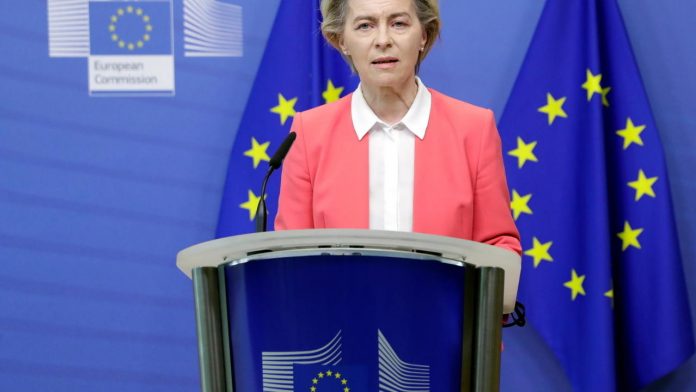 The Prime Minister of the United Kingdom Boris Johnson and EU President Ursula von der Leyen will decide whether to abandon post-Brexit trade talks on Sunday after their latest crisis talks.

The British negotiator David Frost met his EU counterpart Michel Barnier ahead of the leaders’ call for an eleven-hour talk at the European Commission’s headquarters in Berlaymont in Brussels.

Frost left again after about an hour and a half and returned to the British diplomatic mission. Downing Street said leaders are expected to speak after noon and officials from both sides are expecting an announcement later in the day.

Sunday is just the latest in a series of probably tough deadlines for negotiations, but with Britain due to leave the EU’s single market in 19 days, tensions are rising.

On Saturday, Britain took the dramatic step of announcing that armed naval vessels will patrol its waters from 1 January to exclude European crews from the fishing grounds they have shared, in some cases for centuries.

Brussels’ tone has been less complicated, and von der Leyen has made it clear that the EU will respect Britain’s sovereignty after the transition period after Brexit, but neither party is yet ready to compromise on the basic principles.

Tensions will rise as Brexit negotiations reach another deadline

Without a trade agreement, cross-channel trade will return to WTO rules, with tariffs raising prices and generating paperwork for importers, and the failed negotiation could poison London-Brussels relations for many years to come.

On Wednesday, after what von der Leyen described as a “lively and interesting” working dinner with Johnson in Brussels, failed to find a breakthrough, the EU chief said they had agreed to “come to a decision by the end of the weekend. “.

But if the talks were to be extended again, it would only be for “a maximum of a few days”, France’s European Minister Clement Beaune told the Journal du Dimanche. “We already have extra time,” he warned.

In London, British Foreign Secretary Dominic Raab told Sky News that he would not yet “close the door” on the chance that talks would continue “if the EU can find its way to treat us as a normally independent country.”

“I think the EU is worried that the UK may actually do quite well when we leave the EU and is worried about the competitive advantage even on the normal global rules that apply,” he said.

Ireland will lose more than most EU members in the future without a deal with its bigger neighbor outside the bloc, and Irish Prime Minister Micheal Martin told the BBC he was still hopeful of a breakthrough.

Martin said that 97 percent of an agreement has been negotiated and “it seems to me that the remaining three percent should not exceed both sides’ ability to bridge”.

“The fact that they negotiated until the night is an important sign in itself. Where the dialogue continues, it gives me hope,” he said.

Much of the text of a possible trade agreement is said to be clear, but Britain has rejected Brussels’ insistence on a mechanism that makes it possible to retaliate if British and EU law differ in a way that puts continental companies at a competitive disadvantage.

“The defense of the internal market is a red line for the European Union. What we have proposed to the United Kingdom respects British sovereignty. It can be the basis for an agreement,” said a leading EU source, reiterating a former von der Leyen. statement.

In London, a government spokesman stressed that Britain was ready to leave the Union and deal with its own affairs after 47 years of close economic integration and that “as it stands now, the offer on the table from the EU remains unacceptable.

“The Prime Minister leaves no stone unturned in this process, but he is quite clear: any agreement must be fair and respect the fundamental position that Britain will be a sovereign nation in three weeks’ time,” the source said.

On Saturday, Downing Street said the government had a playbook that “maps each individual predictable scenario” for potential problems after December 31, and “no one needs to worry about our food, drugs or vital supply chains.”