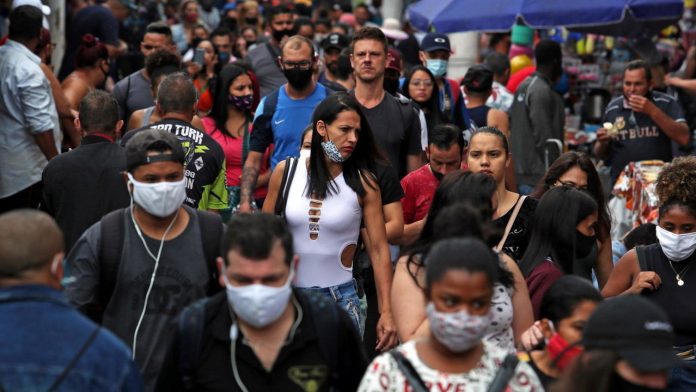 South America is heading for enormous economic hardship after being hit hard by the Covid-19 pandemic, which has revealed the severity of economic inequality across the continent.

The United Nations Economic Commission for Latin America and the Caribbean (UNECLAC) presented a negative view of the region in a report published on December 11, which described South America as the “hardest hit” region in terms of “public health and economic development” during the coronavirus crisis.

After a “golden decade” in which a natural resource boom provided the means to reduce economic inequality, South America’s GDP per capita fell to the same level as 2010 at the end of 2020.

The longest shutdown in the world

Latin America and the Caribbean have recorded nearly half a million coronavirus deaths, including more than 185,000 in Brazil and 118,000 in Mexico, according to WHO data.

Argentina has registered more than 40,000 deaths from Covid-19. Nevertheless, its government was one of the fastest to set up a deadlock and imposed strict containment measures on 20 March. The lockout did not end until November 8, making it the longest in the world.

In theory, the closure of borders and the introduction of lock-in measures should have stopped the spread of the virus. Consequently, the failure of President Alberto Fernandez’s strategy to live up to its promises has left a bitter taste in the mouths of many Argentines. Some doctors in the country attributed the high number of deaths despite the long suspension of lax implementation of social distancing rules: “Is there isolation? There is no one. Is there [enough] Test? No, it does not exist, Carlos Kambourian, a pediatrician in Buenos Aires, told Reuters in October.

“It has been very difficult to deal with the feeling of disappointment, even if the lock saved healthcare the worst,” says FRANCE 24’s Argentina correspondent Mathilde Guillaume.

The financial damage of the locking is serious, Guillaume continued. “We now see that many companies will not reopen and one in ten children has dropped out of school due to the lack of resources for the most disadvantaged. At the same time, a devaluation of the currency is threatening to further increase the cost of living. ”

Debates on lock-in measures have been just as intense in neighboring Brazil. President Jair Bolsonaro has consistently minimized the severity of the disease, especially with his (i) famous statement on April 28: “What do you want me to do? I am the Messiah (the meaning of his middle name) but I can not work miracles. ”

Bolsonaro’s infidelity did not prevent Brazil’s 27 states from imposing containment measures. However, the measures taken by regional and local authorities deviate wildly from strict locking to mere recommendations in a mosaic of policies.

Even within local authorities, the policy for suspension has sometimes varied. In Rio de Janeiro, the mayor decided on December 4 to close schools, while shopping centers would be open 24 hours a day to facilitate Christmas shopping.

Brazil’s GDP decreased by 9.7 percent during the second quarter of 2020, which is a larger decline in production than in the country’s previous nine recessions. More than 67 million Brazilians – most of them living in the country’s poor northern and northeastern regions – have participated in a monthly benefit program costing around € 47 billion. However, Bolsonaro promised to end this plan in December – despite a warning from think tank Fundacao Getulio Vargas that this could throw about 15 million people into poverty.

Peru has the world’s highest mortality per coronavirus per capita after Belgium, according to the data analysis website Statista. It is also facing one of the most severe economic shocks in the region. The IMF estimates that Peru’s GDP will have fallen by 14 percent by the end of 2020.

Complementing the country’s challenges is the difficulty of distributing financial support, as 70 percent of Peruvians work in the informal economy and 60 percent do not have a bank account. Former President Martin Vizcarra set a goal to ensure that all Peruvian adults have an account by 2021, but the proportion of people with an account increased from 38 percent before the pandemic to just 40 percent in August.

Vizcarra’s parliamentary antagonists accused him in November, in part because he allegedly handled the pandemic. But he was quick to impose a lockdown on the pandemic – on March 15, just nine days after Peru’s first confirmed fall, and ahead of many of the European countries where the virus was already on the rise.

Given the profound problems that Covid-19 has identified in Peru, it would be difficult to argue that Vizcarra could have done much better, Colin Harding, a Latin American specialist and ex-correspondent in the region for various British newspapers, told JowharHe followed the advice and locked himself in quickly – but as soon as you start to relax rules, of course, the virus comes back with a whirl. And Peru has a rather inefficient public health system; Hospitals are poorly equipped and there are not enough of them. Vizcarra probably did the best he could with what he had. ”

Hopefully Columbia is focusing on vaccines

Columbia, South America’s second largest country by population behind Brazil, has also been hit hard by the Covid – 19 pandemic with more than 1.5 million confirmed cases and more than 40,000 deaths due to the virus. President Ivan Duque announced a residency order for all Colombians over the age of 70 on March 17. Three days later, he introduced a month-long national lockdown that was eventually extended nine times and lasted until September 1.

The long shutdown triggered Columbia’s worst recession since records began, with the country’s GDP refueling at 15.7 percent in the second quarter compared to the same period in 2019.

Colombia’s daily recorded Covid-19 case broke the record 13,990 on December 19 – a day after Duque announced an agreement with Pfizer and AstraZeneca to buy 20 million doses of coronavirus vaccine. The country will receive 1.7 million doses of Pfizer jab in February, the health ministry said, enough to inoculate about 850,000 people.