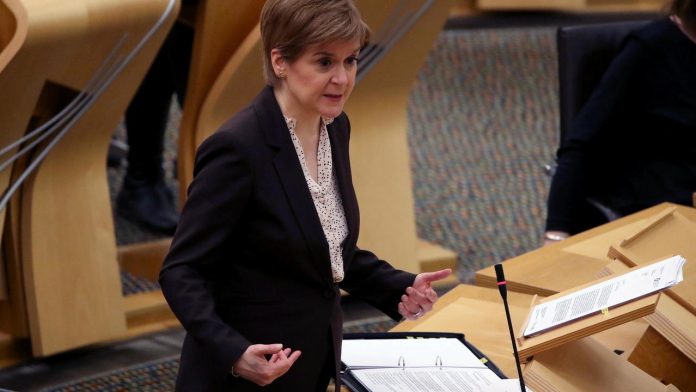 Scotland announced on Monday the strictest lock-in of Covid-19 since March in March, just as the British Prime Minister Boris Johnson would announce tougher curbs in England to contain a rapidly spreading outbreak of a new coronavirus variant.

The UK has the world’s sixth highest official death toll from coronavirus at 75,024, and the number of new infections is sky-high across the country.

Scotland’s Prime Minister Nicola Sturgeon said the new variant accounted for almost half of new cases in Scotland and is 70 per cent more transferable.

Scots, she said, would be required by law to stay home in January from midnight. Schools will be closed to all but children of important workers.

“I am more concerned about the situation we are facing now than I have been at any time since March,” Sturgeon told the Scottish Parliament.

“As a result of this new variant, [the virus] has just learned to run much faster and has definitely taken off in recent weeks, says Sturgeon.

Meanwhile, Prime Minister Johnson, who has said tougher action is imminent, announced that he would speak to the nation at 8 pm local time. The British Parliament will be recalled from its holiday break to sit on Wednesday. The Prime Minister’s Office did not release any details about the new measures before Johnson’s comments.

When he visited a hospital to see the first people get the AstraZeneca / Oxford vaccine, Johnson said the country was facing “tough, tough” weeks ahead.

“If you look at the numbers, there is no doubt that we will have to take tougher action and we will announce them in due course,” he said. “We’ve got the virus really strong.”

England, Scotland, Wales and Northern Ireland are implementing their own Covid-19 responses, although they are trying to coordinate more across the UK.

The government can think about reopening high schools

England is currently divided into four restrictions, depending on the presence of the virus, with the vast majority of the country in levels 3 and 4 where social mixing is limited and restaurants and pubs are closed.

As England reverted to the severe lockdown introduced during the first wave in March, Johnson was also asked if schools would need to close again and return to online learning.

He said the option would remain a last resort for primary schools given the social and educational damage that can be done to isolated children, but he indicated that they may need to rethink a plan to resume high schools for students aged 11 to 18.

“It looks like high schools are likely to play a bigger role in spreading the epidemic than elementary schools, so we need to look very closely at what we do with high schools later this month,” he said.

As is the case in most countries, the British government has spent the year balancing the need to shut down the country to contain the virus with the need to protect the economy.

The first national coronavirus lock-in in May last year led to a 25 percent reduction in economic output – unmatched by modern records – making the UK economy hit harder by the pandemic than most others.

While the economy partially recovered during the third quarter, renewed lock-in measures threaten to cause a recession in early 2021.