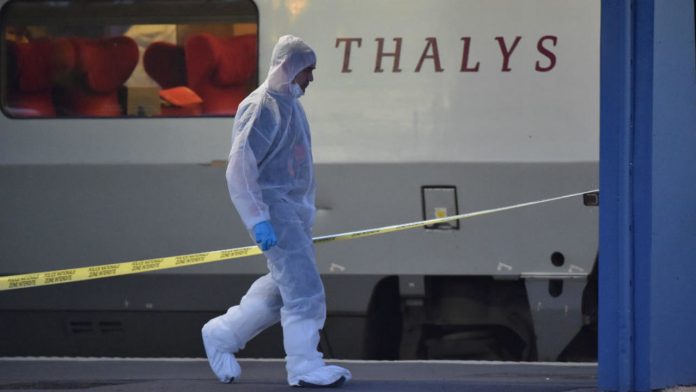 The trial of a suspected Islamist terrorist accused during a 2015-rejected attack by a high-speed train in France opens on Monday in Paris.

Ayoub El Khazzani boarded the Amsterdam-Paris Thalys train on 21 August 2015 and launched his future attack moments after the train crossed the Belgian border into France.

The Moroccan citizen was heavily armed when he came out of a toilet on the train and opened fire inside a carriage, but the gunman was overpowered by passengers, a French citizen and three Americans on holiday. About 150 passengers were on board the carriage. Everyone fled alive.

Hollywood icon Clint Eastwood portrayed the events of the train in a 2018 film, “The 15:17 to Paris”. The film featured the three American heroes – US military officials Spencer Stone and Alek Skarlatos and their friend Anthony Sadler – who repeated their own roles in the interrupted attack.

“I just remember I was lucky I was alive,” Skarlatos told Jowhar2016. “We could have died so easily if it was not too lucky and just had the right reaction,” he said, attributing the fact. that the friends had known each other “since we were five years old” in their shared second decision to “charge the guy” together. The three men have since been naturalized as French citizens at their request. Skarlatos referred to the Thalys experience on the campaign track in his ultimately failed Republican 2020 bid for Congress in Western Oregon.

Director Eastwood has been called as a witness “because his film properly involved, the court believes, the re-creation of what exactly took place that day,” Catherine Norris-Trent of Jowharreported from the courthouse on Monday morning. Partly due to the coronavirus pandemic, the 90-year-old American filmmaker is expected to provide evidence via video link to the court in Paris early next week.

Stone, Skarlatos and Sadler, on the other hand, will perform in person. “The three men are traveling to Paris and we are told that they will present evidence before the court at the end of this week,” Norris-Trent reported. “They have said that they feel it is important to tell their story and they also want to see the future attacker in the eye and hear answers directly from him,” she said.

Among other charges, Khazzani is accused of attempted murder with intent to commit terrorism and association with terrorist networks. He reportedly joined the Islamic State group in Syria in May 2015. If convicted, the 31-year-old faces life in prison.

The main suspect will be connected to the bridge at the special anti-terror court in Paris by three other men accused of having helped him in the devastated attack.

“One only needs to know that Ayoub El Khazzani had 300 rounds of ammunition and firearms to understand what we narrowly avoided, a tragedy, a massacre,” said François Hollande, then president of France, at a ceremony decorating fast-thinking Americans with the Legion of Honor. days after the event.

Khazzani does not deny having boarded the train to carry out an attack. A legal source said he admitted to investigators that he had planned the attack but said he only intended to attack American soldiers on leave, not civilians. He told investigators that he decided on the attack at the last second but that it was too late to avoid the confrontation with the passengers, the source says.

Khazzani’s lawyer Sarah Mauger-Poliak has said that her client is a changed man who has rejected radical Islamist doctrine and regrets his actions.

Jihadist terrorists would strike France almost four months after the dramatic event at Thalys, killing 130 people in concerted attacks on Bataclan’s concert halls and café terraces in Paris and at the Stade de France sports ground north of the capital on the evening of November. 13, 2015.

At the Paris courthouse on Monday, Norris-Trent stated that one of the most important issues that the Thalys trial will address is the link that the tough train attack may have had with the other 2015 attacks in France. “Prosecutors hope to prove that the future attacker in this case traveled to Europe with the man said to be the mastermind of the November 2015 attacks,” she reported.

Belgian citizen Abdelhamid Abaaoud, believed to have been one of the masterminds behind both the Thalys and November 13 attacks, was killed by police in a Paris suburb in November 2015, shortly after opening fire on a café.

The Thalys attack trial comes with France on alert following a new attack on jihadist allegations, including the beheading of teacher Samuel Paty northwest of Paris on October 16 and the murder of three people in a church in Nice on October 29.

The trial is set to end on December 17.