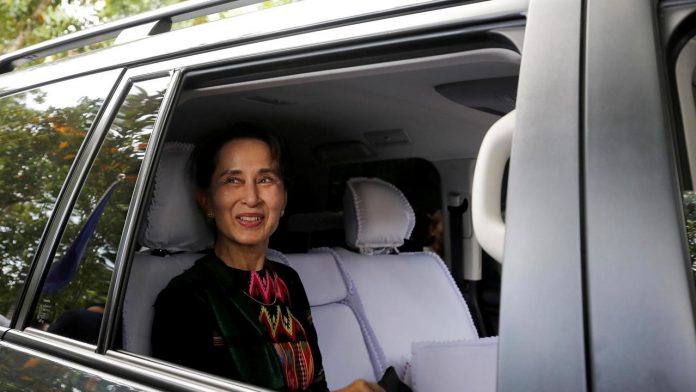 Myanmar leader Aung San Suu Kyi’s ruling party has won enough parliamentary seats to form the next government, according to official results from a general election released on Friday.

The latest election results on November 8 confirmed that Suu Kyi’s National League for Democracy (NLD) party had secured the 322 seats in the bicameral legislature needed to form the next government.

The NLD has taken 346 seats out of the 412 seats declared so far, with 64 more seats still available and not yet announced.

Sunday’s election was seen as a referendum on the new democratic government led by Aung San Suu Kyi and her National League for Democracy (NLD), which is still very popular at home but has seen its overseas reputation tarnished by allegations of genocide against the Muslim minority Rohingya. .

The European Union and Britain praised Myanmar for the vote but criticized more than a million voters, including hundreds of thousands of Rohingya Muslims in the state of Rakhine.

US Secretary of State Mike Pompeo said the vote marked an important step in Myanmar’s democratic transition, although Washington was concerned about the large number of seats reserved for the military and the discrimination of groups including Rohingya.

In a statement, he also expressed concern about the cancellation of voting in parts of several states and regions and the disqualification of candidates “based on arbitrary application of citizenship and residence permit requirements”.

Some can not vote

The military, which ruled Myanmar for nearly 50 years until it began withdrawing from civilian politics in 2011, controls a quarter of the seats in both houses of parliament under a constitution it drafted and which Suu Kyi wants to change.

The NLD had been expected to win, but by a smaller margin after the emergence of new parties and ethnic minority parties that received support in some regions.

Political analyst Yan Myo Thein said early results showed that ethnic parties had won some seats in the states of Kayah, Mon and Shan, where many people have complaints against the central government, but the overall picture was of another NLD landslide.

Contrary to the wave of optimism that greeted the NLD’s win in 2015, Myanmar held this election amid a sharp rise in COVID-19 infections, economic hardship and escalating ethnic conflicts.

More than a million people could not vote after the vote was called off due to insurgency.

In the state of Rakhine, where Rohingya Muslims are confined to camps and villages and the vote is mostly denied because they are not citizens, the vast majority of polling stations were closed due to clashes between government forces and ethnic insurgency.

Myo Kyaw, secretary general of the Arakan League for Democracy (ALD), said that Rakhine’s nationalist Arakan National Party (ANP) had won most of the seats in the state.

The Party of Democracy and Human Rights, a Rohingya party, said it was “completely disappointed” that its people had been given the right to freedom.

The government does not take into account most of the citizens of Rohingya in Myanmar but immigrants from Bangladesh, although many can trace family roots back many generations.

The United Nations has said there was genocide intent in a 2017 military operation that forced 730,000 Rohingya to flee to Bangladesh. Myanmar says its security forces conducted legitimate operations against Rohingya militants.