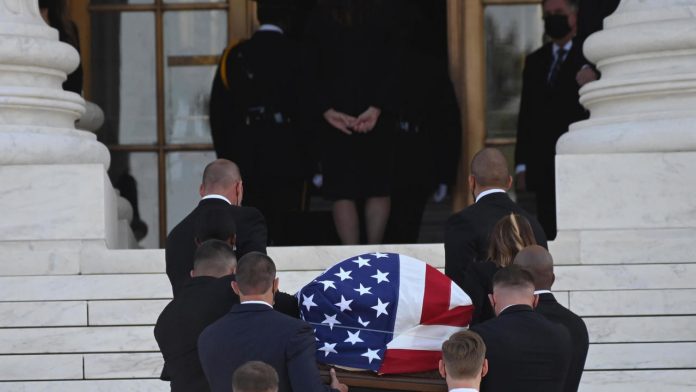 Jowharlooks back at the famous faces that have left us in 2020, from lion-clad British spy novelist John Le Carré to left-wing US Supreme Court Justice Ruth Bader Ginsberg to the last icon of Hollywood’s golden age, Olivia de Havilland.

American basketball player Kobe Bryant was born on August 23, 1978 and died on January 26, 2020 in a helicopter crash in California that also killed his 13-year-old daughter Gianna and seven others.

Bryant was a five-time NBA champion in a career that began in 1996 right from high school and lasted until his retirement in 2016. He was also a two-time Olympic gold medalist and helped spark the American squad of NBA stars to 2008 titles in Beijing and 2012. in London.

Bryant bowed out of the NBA in 2016 and scored 60 points in his final appearance before his loving fans at home for his club LA Lakers. The game was the end of a story in a two-decade-long sports career.

Lakers fans face a mural of Kobe Bryant and his daughter Gianna Bryant on October 11, 2020 in Los Angeles, California, after the team defeated the Miami Heat in the NBA Finals in Game 6. © Brandon Bell, AFP

He was best known for his role as a titular character in the Hollywood classic Spartacus in the 1960s. Other acclaimed roles include his appearance as Vincent Van Gogh in Lust for Life in 1956 and the 1964 political thriller Seven Days in May, opposite Burt Lancaster – a frequent collaborator with whom Douglas has worked on several films.

Douglas was also known for standing up to McCarthyism, insisting that Spartacus’ screenwriter Dalton Trumbo – who had signed a pseudonym after being blacklisted for links to the US Communist Party – be credited under his real name.

Kirk Douglas arrives to receive the inaugural award for “excellence in film”, presented by the Santa Barbara International Film Festival at a gala gathering with a black tie in his honor in Santa Barbara, California, on July 30, 2006. © Phil Klein, Reuters

A career officer in the Egyptian Air Force, whom he joined as a teenager, Mubarak became a national hero after playing a key role in the Arab-Israeli war in 1973. He took over as the country’s president just eight years later, aged 53, after the assassination of President Anwar Sadat.

Mubarak spent three decades in office and played a prominent role in the Israeli-Palestinian peace process. He became an important ally of the United States by gathering Arab support for the First Gulf War.

Egypt received billions of dollars in support during its time, but its presidency was increasingly marred by unemployment and corruption. Dissatisfaction boiled over in January 2011, at the height of the Arab Spring protests, and he was forced to resign.

The following year, Mubarak was found guilty of involvement in the killing of protesters in Cairo’s Tahrir Square. That conviction was later revoked and he was released in March 2017.

Hosni Mubarak, who died at the age of 91, was Egypt’s president for three decades. © Amr Abdallah Dalsh, REUTERS

Hollywood actress Olivia de Havilland was born in Tokyo to British parents on July 1, 1916 and died on July 26, 2020, at the age of 103. De Havilland was best known for her role as Melanie Hamilton in the 1939 classic Gone with the Wind, for which she won an Oscar for Best Supporting Actress.

In the late 1940s, she avoided writing for her previously in-depth roles with acclaimed performances as a woman trapped in a Kafkaesque mad asylum in The Snake Pit (1948) and as the tragically misunderstood Henry James heroine Catherine Sloper in The Heiress, a 1949 adaptation Washington Square.

De Havilland fell in love with the French newspaper editor Pierre Galante in 1953 and moved to Paris the same year. She lived in the city of light for the rest of her life.

Two weeks before her 101st birthday, in June 2017, de Havilland was named Dame Commander of the British Empire by Queen Elizabeth, making her the oldest woman to receive the honor.

Bader Ginsburg enrolled at Harvard Law School in 1956, where she was one of only nine women in a class of about 500 men. She later moved to Columbia Law School when her husband, Martin Ginsburg, got a job in New York. She graduated in 1959, first in her class.

She progressed in the following decades, especially with disputes and advocacy to support gender equality.

President Bill Clinton appointed her to the Supreme Court in 1993. Remarkable majority views include the United States v. Virginia (1996), which struck the Virginia Military Institute’s only male admission policy, and Olmstead v. LC (1999), which ruled mental illness is a form of disability protected. of the 1990s Americans with Disabilities Act.

During the Obama era, a new generation of progressives came to honor Bader Ginsburg and gave her the moniker “Notorious RBG”.

The American rock star Eddie Van Halen, the guitarist and lead songwriter for the band bore his last name, was born on January 26, 1955 and died on October 6, 2020, aged 65 years.

Born in the Netherlands and raised in California, Van Halen founded the rock band with his older brother Alex in the 1970s and quickly gained a huge fan base with his distinctive guitar technique.

The group’s classic hits include Running with the Devil and the guitar sun Eruption, both released in 1978.

“He was and will always be remembered as the original James Bond,” said film franchise producers Michael Wilson and Barbara Broccoli at his death. “He revolutionized the world with his dirty and witty portrayal of the sexy and charismatic secret agent.”

Connery’s role as the iconic British secret agent gave him roles in film directing giants, such as Alfred Hitchcock, in the psychological thriller Marnie from 1964 and Steven Spielberg, the father of the main character in Indiana Jones and the Last Crusade (1989).

Gréco had just started as a young dancer at the ballet school in Paris when the Nazis invaded France in 1940. She was arrested and her older sister and her mother – a member of the French resistance – were both sent to the Ravensbrück concentration camp. They returned to France after its liberation in 1945.

Maradona was known for his remarkable dribbling and shooting skills, as well as his drug and alcohol abuse off the field. The 1986 World Cup quarter-final match against England portrayed both his genius and his dark side.

It was 0-0. Maradona pulled into the box to face an Argentine lob. England goalkeeper Peter Shilton came out to parry the ball, only for Maradona to flaunt handball it into the net. The referee did not see and counted it as a goal. It was “God’s hand,” Maradona said. It was “a villain’s hand”, replied England’s legendary boss Bobby Robson.

A few minutes after the cheating, Maradona picked up the ball in the middle of the pitch and ran at breakneck speed, making his way through England’s midfield and defense before hitting it past Shilton. Unlike the “hand of God”, no one questioned the nickname of this goal, “the goal of the century”.

Giscard made the “modernization” of France the theme of his time between 1974 and 1981, launching the TGV high-speed rail service and moving towards nuclear power and the country’s dominant energy source. His government also legalized abortion, restored divorce with mutual consent, and began providing free contraception.

He slipped into obscurity after his 1981 defeat against François Mitterrand, the charismatic old fox of the French left. Speaking at Mitterrand’s funeral in 1996, former Minister André Santini said: “I do not remember us doing the same for Giscard.”

In the 2000s, Giscard resurfaced in the public sphere, under the leadership of the European Convention, which drafted the proposed EU Constitution. Critics saw it as a coup against national governments; French and Dutch voters rejected the 2005 referendum.

John Le Carré was a young MI6 intelligence officer when his first novel, “Call for the Dead”, was published in 1961, centered around the character George Smiley, a bookish, middle-aged spy master whom Le Carré shaped as a more realistic alternative to James Bond. He left MI6 and became a full-time writer when his third novel, “The Spy Who Came in From the Cold”, became an international bestseller in 1963.

Other works include “Tinker Tailor Soldier Spy” (1974), about Smiley’s hunt for a mole on top of MI6, and “Smiley’s People” (1979), in which the cerebral spymaster defeats his KGB nemesis Karla.

Although critics regard Le Carré’s novels during the Cold War as his richest work, his later novels were quick to reflect how history had not ended with the fall of communism, with “The Night Manager” (1993) examining the arms trade, “A Most Wanted Man”. “(2008) which deals with CIA reproduction programs and” Our Kind of Traitor “(2010) which shows the international spread of Russian organized crime.